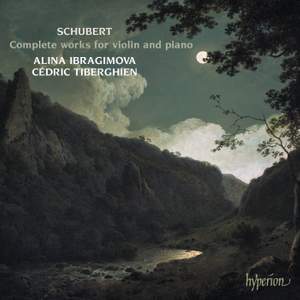 Here we get all of Schubert's works written for violin and piano, in performances which it is hard to imagine ever being bettered...Alina Ibragimova and Cedric Tiberghien don't attempt to make... — BBC Music Magazine, September 2013, 5 out of 5 stars More…

Recording of the Week,  Schubert works for violin and piano from Ibragimova and Tiberghien

The duo’s intimate and restrained approach scores highly for pure beauty of tone and natural rapport, but doesn’t preclude plenty of playfulness and bite in the faster movements - fantastically vibrant playing, technically brilliant and always stylish.

The luminous partnership of Alina Ibragimova and Cédric Tiberghien returns to Hyperion for this double album containing Schubert’s complete music for violin and piano. Their intelligence and technical prowess, their seamless and intimate connection as performers and their profound understanding of the music combine in magical performances.

While still in his teens, Schubert wrote four works for violin and piano that could have been given the label ‘sonata’, yet none of the four was published with that title. The first three, completed in 1816, bear instead the designation of ‘Sonatina’, perhaps to appeal to the amateur market. But these are highly accomplished works by the teenage composer and there is little ‘domestic’ feeling in the extended, mysterious unravellings of D385 which hint at compositions yet to come.

The later Violin Sonata in A major, D574 (now described as a ‘Duo’), urges the violinist on to greater virtuosic feats, and the Rondo in B minor even more so, with the piano sometimes treated as a surrogate orchestra. The extensive Fantasy in C major, written in the last year of Schubert’s life, is a masterpiece: the composer’s greatest achievement in this genre, which combines poignancy with sheer joy in life itself.

Here we get all of Schubert's works written for violin and piano, in performances which it is hard to imagine ever being bettered...Alina Ibragimova and Cedric Tiberghien don't attempt to make them bigger or greater than they are.

These performances exhibit that feeling of spontaneous enjoyment which animated Ibragimova and Tiberghien's live Beethoven set from the Wigmore Hall. Their playing is constantly graced by small touches of rubato, never very much but enough to give a sense of freedom and individuality

These are magical performances by two young artists who clearly enjoy the joint experience of music-making. Intelligence and integrity mark these interpretations out with distinction. I was very taken by the rich tone of the violin, which is an Anselmo Bellosio of 1775... This is one of the listening highlights of my year - all in all a consummate achievement.

It is fantastically vibrant playing, technically brilliant and always stylish. As in their previous discs together, Alina Ibragimova and Cédric Tiberghien play with a real rapport and affinity, and Tiberghien’s sensitive touch and ability to identify the most crucial harmonies and allow them just that fraction more time helps elevate this music making to the very highest level.

Most bewitching of all, and performed with a lightness and poise by this established duo, is the Fantasy in C major, breaking convention at every turn, written in 1827.