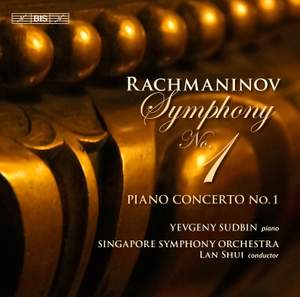 the orchestra is sleek and well balanced in a handsome recording...Sudbin's playing feels as if he's improvising whole swathes. Performances of the Concerto don't come much better than this. — BBC Music Magazine, October 2013, / More…

Completed in 1891 and 1895 respectively, the Piano Concerto No.1 and the D minor Symphony were Sergei Rachmaninov’s first large-scale orchestral compositions, written by a young man still in his early 20s. The composer, whose self-critical vein was evident from the start, almost immediately decided to revise the concerto, even though he did choose to perform it in its original form when he made his London début as a pianist in 1899. Two years earlier, the symphony had been premièred, an event which has become notorious as one of music’s great disasters: the rehearsal time had been completely inadequate, and Glazunov, who conducted the work, was less than sympathetic to it – and may also have been drunk during the performance. The scathing reception caused Rachmaninov to doubt not only the quality of the work, but his own gifts as a composer, and he didn’t write anything of importance for three years. In 1917, he did revise the piano concerto, making use of the experience gained from having in the meantime composed the immensely successful 2nd and 3rd piano concertos and performing them numerous times himself. Rachmaninov also repeatedly expressed the wish to return to his first symphony, but the score was lost in the upheavals of the Russian revolution and the composer's move to the USA. Not until after his death in 1943 was a set of the original orchestral parts rediscovered. That Rachmaninov never forgot the work is however proven by the fact that he quoted it in his very last orchestral composition, the Symphonic Dances from 1940. The Singapore Symphony Orchestra and Lan Shui have previously impressed critics worldwide with their performances of Rachmaninovs Second and Third Symphony, and are once again joined by the piano soloist Yevgeny Sudbin, with whom the team recently recorded what the reviewer in American Record Guide described as 'the most stunning performance of the Rhapsody [on a theme of Paganini] I’ve ever heard.'

the orchestra is sleek and well balanced in a handsome recording...Sudbin's playing feels as if he's improvising whole swathes. Performances of the Concerto don't come much better than this.

Lan Shui has good, firm ideas in this interpretation [of the Symphony]...The chief focus of the CD, however, is Yevgeny Sudbin's thrilling, beautifully shaped performance of the First Piano Concerto...Sudbin has a natural feel for the Rachmaninov idiom: the piano playing has depth of tone, subtlety and richness of texture, and scintillating dynamism

Shui certainly has an ear for the romantic passion behind the notes, though others have brought out the Russian spirit more in terms of orchestral colour...The eloquence of Sudbin’s playing in the central Andante is a joy...This is a praiseworthy release though once again it is Yevgeny Sudbin who steals the show.

Lan Shui with the Singapore Symphony Orchestra is obviously a conductor who cares about the symphony, but, if anything, he tries just a mite too hard...With Sudbin asserting his interpretative personality [in the Concerto], the orchestra and conductor are inspired to match a thrilling performance that stands alongside the greatest.

Full-blooded yet precise in tone and attack, Sudbin hits the mark in every register, from grand rhetorical gestures to crisp-fingered lyrical song...[The Symphony is] projected here with gorgeous colours and the sort of beseeching woodwind playing that can make a listener go weak at the knees.