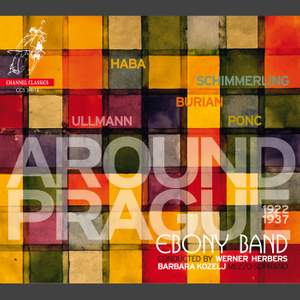 Around Prague provides a rare snapshot of Prague in the 1920s and 1930s when it was a cultural hotspot which, if perhaps not quite rivalling the legendary richness of Paris, certainly offered... — MusicWeb International, 16th July 2013 More…

E. and A. Schulhoff

The city of Prague was a cultural hotspot in the 1920s and 30s. From 1918 to 1935 the country's president was the European-minded and remarkably liberal philosopher Thomas Masaryk, and his successor Edvard Benes was a kindred spirit.

The three population groups, enriched by emigrants from Russia, the Ukraine, Germany and Austria, competed with one another but also inspired each other. This was the Prague in which the composers on this CD were involved. In their music we hear the old and the new, tradition and renewal, but above all, imagination and talent.

When the border between East and West opened up in 1991, their music had hardly been heard in the West for some fifty years, having been suppressed first by the Nazis and then by suffocating communist rule. With the exception of Ullmann, even today these composers have hardly reached our concert halls.

Around Prague provides a rare snapshot of Prague in the 1920s and 1930s when it was a cultural hotspot which, if perhaps not quite rivalling the legendary richness of Paris, certainly offered a different flavour; mixing the cultures of central, eastern and northern Europe and generating its own subtle and not-so subtle brands of anarchy and the avant-garde.