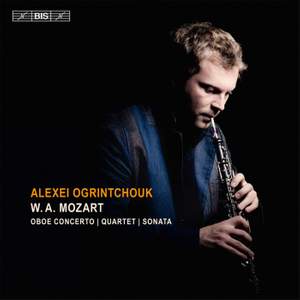 Offer, Mozart: Music for the Oboe

Alexei Ogrintchouk performs three pillars of the oboe repertoire with the support of the renowned Lithuanian Chamber Orchestra and the company of three highly respected young string players in the quartet.

As principal oboist of the Royal Concertgebouw Orchestra, Alexei Ogrintchouk is an international soloist in his own right. His performances of J.S. Bach’s oboe concertos was judged to be ‘as astonishing as it is successful’ on the web site klassik-heute.de, with a sound described as ‘generous, rounded, warm and velvety’ in Classica.

To round off the programme Alexei has called on his father, the pianist Leonid Ogrintchouk, and together the two perform a transcription of the Violin Sonata in B flat major, K 378, composed during the same period as the two other works on this disc.

Using a modern sound, the orchestra simply establishes a spruce, finely tailored context for the solo line [in the C Major Oboe Concerto]...The playing here is of an equally polished, characterful, spirited quality.

[if] you were won over by Alexei Ogrintchouk’s warm and limpid tone in his album of Bach concertos...then this is certain to go on your want-list...An all-star trio is no guarantee of excellent chamber music making, but in this case everyone is beautifully integrated and everything is in the service of Mozart’s marvellous music...All in all this is a very fine package