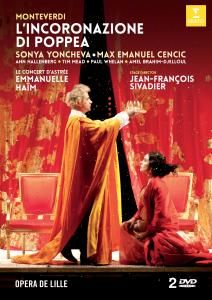 [Haim leads with] a fine sensitivity towards the urgent, tensile springiness of the melodic lines; and a superb handling of the instrumental forces...The title role here is taken by the suitably... — BBC Music Magazine, August 2013, 4 out of 5 stars More…

One Roman emperor is not enough for conductor Emmanuelle Haïm. After Julius Caesar in Handel’s opera –recorded for Virgin Classics DVD at Paris’ Palais Garnier with Lawrence Zazzo as Giulio Cesare and Natalie Dessay as Cleopatra – she now brings a ruler of less illustrious reputation: Nero (Nerone) in Monteverdi’s sensuous and cruel story of love, ambition and politics, L’incoronazione di Poppea.

This production, recorded in 2012 at the exquisite opera house in Lille, is by the French director Jean-François Sivadier; he was also responsible for La traviata in 2011 at Aix-en-Provence, a staging which starred Natalie Dessay and can be seen on a Virgin Classics DVD.

In Poppea, Sivadier takes a relatively minimalist approach, with the characters in an eclectic mixture of modern and Ancient Roman dress. Nerone, here an almost punk-like figure, with peroxide blond spiky hair, is portrayed by star countertenor Max Emanuel Cencic, who has recently enjoyed major successes with his Virgin Classics recordings of Vinci’s rare opera Artaserse and a recital programme Venezia. Cencic has already appeared on a Virgin Classics DVD of Poppea, conducted by Emmanuelle Haïm’s mentor William Christie, recorded in Madrid and released in 2012, but there he played Poppea’s discarded lover, Ottone, a role taken in Lille by British countertenor Tim Mead. Poppea herself is sung here by the glamorous Bulgarian soprano Sonya Yoncheva, who won Plácido Domingo’s Operalia competition in 2010 and is a former member of William Christie’s academy for young singers, Le Jardin des Voix.

Speaking of his approach to the opera, Jean-François Sivadier has said: “Nero’s court is cut off from the world, a place ruled by terror and paranoia, a family in which each member is full of ambiguities. I wanted the audience to be constantly aware of the interdependence of all the characters: each event takes the course of history in a new direction; it is like a chain of chemical reactions between bodies that are sensitive to the slightest change.”

As the French newspaper Les Échos wrote: “The excitement, the passions, the impulses and the hatred to be found in this Shakespearean story are all the more intense [for the sobriety of Sivadier’s approach]. Sonya Yoncheva has no trouble seducing both Nerone and the audience, thanks to her voluptuous roundness of voice and physique. A feline lover, she knows how to flash her claws when she wishes to depose her rival Ottavia, the unhappy woman who, in Ann Hallenberg, finds an interpreter as superb for the nobility of her singing as for her expressions of sorrow ... Max Emanuel Cencic portrays a Nerone who is in thrall to his senses while remaining the pitiless master of his court. Emmanuel Haïm takes the colours and dramatic nuances proffered by her ensemble, Le Concert d’Astrée, and distributes them to fine effect. She takes an active role in Monteverdi’s triumph.” Classica magazine, meanwhile, wrote that: “Emmanuelle Haïm and Le Concert d’Astrée, in fine form, breathe amorously hot and cold over Jean-François Sivadier’s intelligent production, which, typically, favours living beings over decor.”

[Haim leads with] a fine sensitivity towards the urgent, tensile springiness of the melodic lines; and a superb handling of the instrumental forces...The title role here is taken by the suitably voluptuous Bulgarian soprano Sonya Yoncheva who has admirable technique and tone

The play-within-a-play a la Brecht eventually recedes and the opera turns specifically into itself, up until very near the end...[Cencic] is one dangerous, hyperactive, dishevelled Emperor...[Haim's] way of colouring a scene rarely fails her.