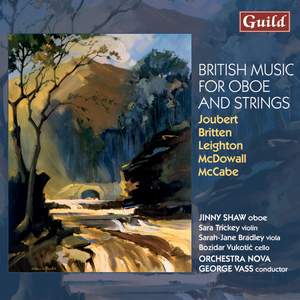 This new recording of British music for oboe and strings features the highly gifted Jinny Shaw in three recent Concertos for oboe and string orchestra by John Joubert, Kenneth Leighton and John McCabe, alongside two other works for oboe and string trio by Benjamin Britten and Cecilia McDowall. Several of these works are receiving their world premiere recordings on this beautifully played and excellently balanced CD. The Orchestra Nova, one of the more enterprising of British orchestras, is conducted by the much admired musician George Vass. An important record.

these diverse works add wonderfully to the repertoire and should help open up new horizons for concert promoters. The disc also showcases some superb young performers...Jinny Shaw proves herself to be a very fine soloist with a beautifully rich tone which balances perfectly with whatever combination is thrown at her.