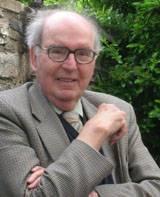 John Pierre Herman Joubert was a British composer of South African birth, particularly of choral works. He lived in Moseley, a suburb of Birmingham, England, for over 50 years. A music academic in the universities of Hull and Birmingham for 36 years, Joubert took early retirement in 1986 to concentrate on composing and remained active into his eighties. Though perhaps best known for his choral music, particularly the carols Torches and There is No Rose of Such Virtue and the anthem O Lorde, the Maker of Al Thing, Joubert composed over 160 works including three symphonies, four concertos and seven operas.

David talks to the Birmingham-based composer, who turned 90 last month, about his opera Jane Eyre - recently recorded for the first time on Somm Records.