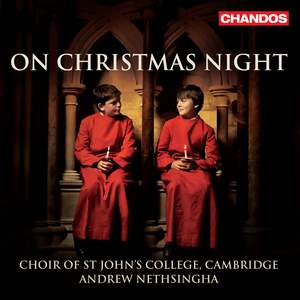 The collective vocal heft of the ensemble's young choral scholars remains a potent weapon under Andrew Nethsinga's direction. He's a man of musical refinement, however, one ready and able to... — Classic FM Magazine, Februrary 2012, 5 out of 5 stars More…

Mathias: A babe is born

Bennett, R R: Out of your sleep

In the run-up to Advent and Christmas, the Choir of St John’s College, Cambridge under Andrew Nethsingha presents a joyous celebration of music for the festive season. The disc includes original works by John Rutter, Sir Richard Rodney Bennett, Elizabeth Poston, and Kenneth Leighton. These are complemented by arrangements of popular songs, and a selection of congregational hymns, all displaying strong ties to the Advent and Christmas seasons.

This disc was recorded in the College Chapel in full surround-sound, which means that it not only sounds spectacular, but recreates to a spectacular degree the experience of listening to the Choir perform in the Chapel.

The Choir of St John’s College, established in the 1670s, is today one of the finest college choirs in the world, known and loved by millions for its recordings, broadcasts, and concert tours.

The collective vocal heft of the ensemble's young choral scholars remains a potent weapon under Andrew Nethsinga's direction. He's a man of musical refinement, however, one ready and able to rein in eager tenors and basses where the melodic interest lies in the gift of his choir's boy trebles...This release stands out thanks to the commitment to quality and high artistic values shown here by St John's College Choir and Chandos.

The traditional carols have a real liveliness and freshness brought about by the young boy trebles, but there are also a good number of less well-known carol settings on here too including a number which I hadn’t previously come across. It is very well recorded by Chandos and right up there with the competition of the years gone past for this type of Christmas selection.

This is a warming disc, eloquently sung by the choir of St John’s. There are some core Christmas hymns, but the bulk of the 24-track programme comprises some of the modern classics of the repertoire such as Elizabeth Poston’s Jesus Christ the Apple Tree and Joubert’s There is No Rose.