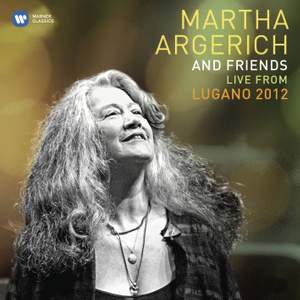 Several of the ensembles could have benefited from more sustained period of rehearsal, yet they still communicate vibrancy and the sheer enjoyment possible when fine musicians get together to... — BBC Music Magazine, August 2013, 4 out of 5 stars More…

Recording of the Week,  Martha Argerich and Friends Live from Lugano

Highlights from the pianist’s month-long annual festival in southern Switzerland include Mozart with Maria João Pires, Schumann with Gautier Capuçon, Brahms with Nicholas Angelich, and piano quartets by Mahler and Dvořák.

EMI Classics is pleased to release the 10th annual 3CD set of highlights from the Progetto Martha Argerich in Lugano, “the delightful festival where youth meets experience and both benefit” (Gramophone). The Times described Argerich’s Lugano Festival as “community music-making on a deluxe scale, with performers and listeners mutually uplifted by music’s wonders”. The set is being released in anticipation of the Festival’s 2013 season.

Reviewing the 2011 Live from Lugano release, Nicholas Kenyon wrote in The Observer, “There are not many reliable annual treats among classical CDs these days, but the series of live recordings from Martha Argerich's Lugano festival are now a highlight of each year.” Andrew Clark in the Financial Times wrote, “Every June [Argerich] and a clutch of friends and protégés make music in a style that reflects her free spirit and total dedication. Even when Argerich is not playing, she seems to inspire the performance.”

The repertoire of Martha Argerich and Friends – Live from Lugano 2012 puts the piano at the centre of the programming, focusing particularly on piano duets and rarely performed and recorded compositions. There is a group from the Austro-German Classical and Romantic tradition, followed by works from Slavic composers, sounds from Italy and France and, as a send-off, a two piano arrangement of an Argentinean tango. The performance of Mahler’s Piano Quartet is something of a family affair, performed by Ms Argerich’s longest-standing artistic collaborator Mischa Maisky, his pianist daughter Lily and violinist son Sascha and Ms Argerich’s daughter Lyda Chen. The orchestral work in this year’s set is Mozart’s Concerto K503 with Argerich and the Orchestra della Svizzera Italiana conducted by Jacek Kaspszyk.

Martha Argerich’s passion, technical virtuosity, temperament, commitment and supreme artistry have illuminated the music world and left audiences spellbound since she won the 1964 International Chopin Competition. Reluctant to perform solo for many years, she has continued to perform chamber music and concertos with orchestra where, in her own words, “I feel the musicians moving about. I watch them and I also move. I’m more natural.”

EMI Classics marked the occasion of Martha Argerich’s 70th birthday in 2011 with the release of four multi-disc sets bearing some of her finest performances from 1965 to 2009.

Few artists have nurtured and promoted emerging young musicians with the level of personal commitment shown by Martha Argerich. In the process, she has created inspired chamber music partnerships mixing established and up-and-coming artists. After setting up Meeting Point at Beppu, Japan in 1996 and the Martha Argerich Festival in Buenos Aires in 1999, the pianist decided to create a similar gathering of musical minds in Europe. The southern Swiss town of Lugano was identified as an ideal setting for a project based on the spirit of building a community of close-knit relationships among young and established artists and the Progetto Martha Argerich was launched in 2002. More than a decade later, the Festival continues to retain its original experimental ‘feel’ because of the original programming and the emergence of new performing talents. Geoffrey Norris in The Daily Telegraph wrote, “It is always instructive to see who has been invited to perform at the Progetto Martha Argerich in Lugano, because the cast list is a reliable guide to some of the most exciting talent in the musical world today.”

The twelfth season of the Martha Argerich Project will take place from 9 June to 3 July 2013 and will include performances by many of the artists on this set.

EMI would like to dedicate these recordings to the memory of Jurg ‘Abdul’ Grand, who founded the Martha Argerich Project at the 2002 Festival and co-directed the 2002 and 2003 events.

“Everything Martha Argerich touches turns to gold, not only her own piano playing but those around her whom she evidently inspires to new heights.” (The Observer)

“These discs are a reminder of a unique, ever-formidable and enchanting artist.” (Gramophone)

Several of the ensembles could have benefited from more sustained period of rehearsal, yet they still communicate vibrancy and the sheer enjoyment possible when fine musicians get together to play chamber music in a relatively relaxed environment. Martha Argerich is the dominating presence, her performances among the most memorable in the set.

every bit as captivating as previous instalments...The only time [Argerich] plays solo is in Mozart’s “Piano Concerto No 25”, almost every note of which she invests with her beguiling sense of discovery: a fabulous, thrills-and-spills performance in which the Argentine pianist, now in her 70s, defies her age.

they tread the fine line between the immediacy and drama of live performance and the accuracy needed for the repeat listening of recorded performance with great dexterity. Each performance on the discs of the 2012 festival is so immaculate that it is an unfailing surprise when the applause appears at the end of a track

Argerich’s only solo performance on this set is Mozart’s Piano Concerto No. 25, K403, which ends the first disc. It is a stunning reading, every note carefully thought about, with touch, balance and phrasing immaculate and her beautiful lyricism reminding us exactly why she is widely regarded as one of the finest pianists on the planet...a true ‘must-have’ if ever there was one!