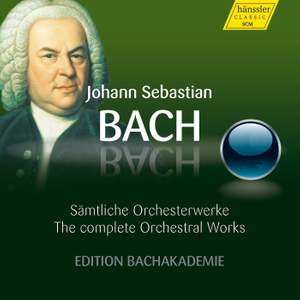 Following on from their reissues taken from Helmut Rilling’s Complete Works of Bach, this 11-CD set takes the Complete Orchestral Works and packages them in a slimline style box set for the first time.

Apart from the famous Brandenburg Concertos and the concertos, this box set also includes reconstructions of works originally intended for other solo instruments, all of which are discussed in the extensive booklet essay on the possibilities and limits of musical reconstruction.

The musicians performing on this interesting set include early recordings from violinists Isabelle Faust and Christoph Poppen, plus the Oregan Bach Festival Orchestra and of course maestro Helmuth Rilling conducting the Bach-Collegium Stuttgart.