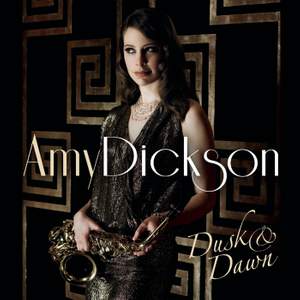 Kern: Smoke gets in your eyes

Waits: In the Neighbourhood

Warren, H: I only have eyes for you

Chopin: Nocturnes, Op. 9: No. 2, Andante in E-Flat Major (Arranged for Saxophone and Piano)

With her new album, Dusk & Dawn, classical saxophonist Amy Dickson introduces a new side to the instrument and takes the listener on an unexpected sojourn through beautiful, lush, romantic music. It is late-night classical listening at its very best.

Born in Sydney & now living in London, 31-year-old Amy – a former student of the Royal College of Music - picked up her first saxophone when she was six. Amy was soon winning competitions and performing; she made her live radio debut aged eight and her concerto debut at 16. She has firmly established the sax’s classical credentials, making the instrument sing with softness, power and lyrical range. A soloist with the world’s finest orchestras, including the London Philharmonic Orchestra, the Philharmonia and the Sydney Symphony Orchestra, Amy has performed at the Vienna Konzerthaus and Sydney Opera House as well as performing chamber music in venues throughout the world including Wigmore Hall and Bridgewater Hall. A passionate champion of contemporary music, Amy has commissioned and premiered works by composers including Huw Watkins, Peter Sculthorpe and Ross Edwards.

She also arranges repertoire for the saxophone, perhaps most notably the Philip Glass Violin Concerto which she recorded together with works by Michael Nyman and John Tavener with the Royal Philharmonic Orchestra under Mikel Toms for Sony Music. Her previous album for Sony Music was Smile, which included works by Elgar, Pärt and Rachmaninov. Amy Dickson is an ambassador of the Prince’s Trust and the Australian Children’s Music Foundation. She is a Selmer Paris Performing Artist.