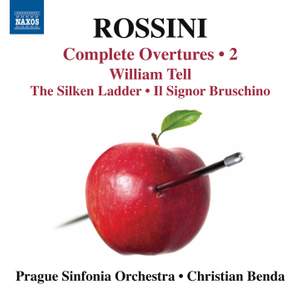 The playing is clean and efficient, well balanced and nicely paced, though the performances rarely rise to the truly inspired. — BBC Music Magazine, August 2013, 4 out of 5 stars

Rossini’s ceaseless wit and invention are best exemplified in his series of operas.

His colourful orchestration and command of both comic and tragic elements can be savoured in this second of four volumes of the complete symphonic overtures. Guillaume Tell, with its overture in four movements, includes a scene for five solo cellos. La scala di seta (The Silken Ladder), one of his most popular pieces, opens with an overture of charm and élan. Volume 1 (8570933) was described by MusicWeb International as “an admirable start to what looks like being a very desirable series”.

Witty and vital, but also darker and rather less well known, Rossini’s overtures cover a wide variety of moods and expressions. This disc includes the perennial favourite La scala di seta (The Silken Ladder), and the witty Guillaume Tell. With little known operatic overtures included, it makes for a finely balanced programme; and whilst the favourites have been multiply recorded, others are very much under represented in the catalogue.

The playing is clean and efficient, well balanced and nicely paced, though the performances rarely rise to the truly inspired.