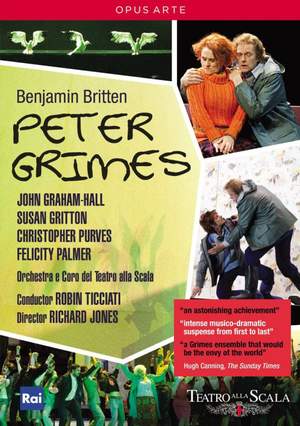 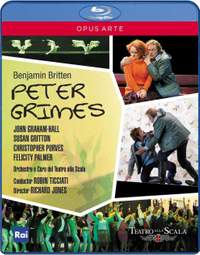 The Italian and international press were unanimous in their praise for Peter Grimes at La Scala, which revived the tradition of Britten's operas on the lyric stages of Italy. A strong British cast was marshalled by the baton of Robin Ticciati, who has already won golden opinions for his opera conducting.

Richard Jones's production focuses on the fisherman as the outsider in a brutal society, cut off by mutual suspicion and misunderstanding: an unforgettable production of an opera that never loses its power.

[Grimes is] no tough fisherman but a seedy inadequate cringing from the local teenagers, and suggesting all too contemporary abuse problems. John Graham-Hall evokes his contorted inner life superbly, but with leaner tones than competitors on video

the pride and joy of Richard Jones's production, not to be missed, is its unerring grasp of the psychology and tiered relationship of all the characters. ...Ticciati eschews the weighty, rather Germanic approach of older conductors...concentrating (like Goodall or Hickox) on rhythmic and instrumental subtleties

Jones has instilled in his singing actors a level of detail and a harrowing believability one is more accustomed to encountering in spoken drama...Gritton's Ellen is remarkable...[Graham-Hall ] lives his role - earnest, lonely, impulsive, with a desperate desire for acceptance...Ticciati is in full control from the start

Jones’s production is uncompromising in its hard- hitting emotionalism...The cast isn’t a series of grotesques but a collection of cameos most of us would recognise in our own daily lives. Robin Ticciati conducts a detailed and loving account of the score, and La Scala’s orchestra responds with depth of feeling.