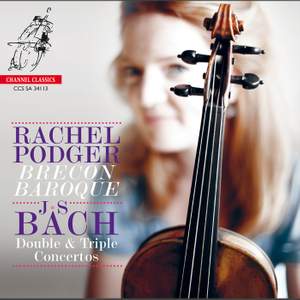 The dynamic ensemble Brecon Baroque was founded in 2007 by violinist and director Rachel Podger as resident ensemble at her annual Brecon Baroque Festival. The international line-up consists of some of the leading lights in the period-instrument world, such as cellist Alison McGillivray, flautist Katy Bircher, oboist Alexandra Bellamy and violist Jane Rogers, as well as some of Rachel's former students who now occupy leading positions in many of Europe's finest ensembles: violinists Bojan Čičić and Johannes Pramsohler.

Brecon Baroque specialises in the music of J.S. Bach and his contemporaries, mostly as a one-to-apart ensemble based on the Cafe Zimmerman ensemble which Bach himself directed. They also appear as a small baroque orchestra for Vivaldi, Telemann, Purcell and Handel. More than any other composer of his period, J. S. Bach realised the possibilities of the concerto avec plusieurs instruments.

Drawing on the precedents of Vivaldi and others, Bach’s probing musical intellect led him down novel paths of invention where the collaborative and antagonistic features of the genre reached unprecedented levels of complexity. (...) The state of the surviving musical sources for Bach’s concertos suggests that he produced them for a variety of contexts, whether the courtly milieu of Köthen, the urban setting of the Collegium Musicum in Leipzig, or even for his own domestic entertainment. This was music that he was willing to rework for different occasions, and each of the concertos on this disc existed in more than one version. (from liner notes by Tim Jones)

the music emerges with integrated, unaffected and airy naturalness...And in BWV1064R, the three-violin version here often outshines the surviving three-harpsichord version. Podger's Bach has always been something special: this is indispensable.

Bach's contrapuntal lines emerge with unusual clarity, animating each detail of the texture. There's little feeling of an imposed interpretation...The outer movements of the well-known Double Concerto are vivacious and poised, and its central Largo combines tranquillity with an unimpeded momentum.

This is the most effervescent, zingy Bach Double Concerto I’ve heard. Close your eyes, don a pair of headphones, and listen to Rachel Podger and Bojan Čičić sparring with effortless, conversational fluency...A life-enhancing disc, infused with terpsichorean joie de vivre.