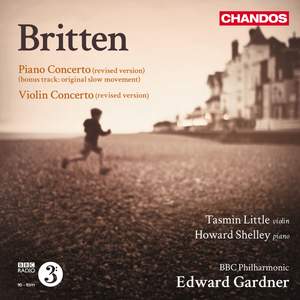 Shelley and Edward Gardner create something more mercurial [than Britten's own reading], Gardner conjuring that lithe, high-tension drama he has so successfully achieved with Britten's stage... — BBC Music Magazine, July 2013, 4 out of 5 stars More…

The prolific nature of Benjamin Britten’s operatic and vocal output makes it is all too easy to forget that prior to the phenomenal success of Peter Grimes in 1945, he was primarily known as a composer of vividly orchestrated instrumental music. Tying in with the 100-year anniversary in 2013 of the composer’s birth, we here present two such works, performed by the BBC Philharmonic under Edward Gardner. Tasmin Little and Howard Shelley are the soloists in the Violin Concerto and Piano Concerto, respectively.

These concertos reflect two very different sides to the composer’s character. The Violin Concerto, which Britten completed in 1939, is essentially tragic and weighty in tone, perhaps reflecting his growing concern with the escalation of war-related hostilities. On the other hand, the Piano Concerto, written the previous year, is generally lighter and brighter, more transparent and simpler in style.

On this disc we have recorded the Piano Concerto in Britten’s familiar revision of 1945, but we also include the original third movement, ‘Recitative and Aria’, which Britten replaced with a new and extended movement entitled ‘Impromptu’. Howard Shelley writes of the decision Britten made to revise the concerto: ‘Why he found it necessary to replace the slow movement, I cannot quite understand – as far as I am concerned both options are masterpieces, and with this in mind we have also recorded the original version, which is fantastical and fabulous, jazzy and endlessly dramatic.’

The Violin Concerto was the first composition Britten completed after arriving in the US in 1939. Our soloist, Tasmin Little, writes of the work: ‘One of the miracles of the piece is the way that the structure is conceived as an ongoing journey. Britten does not conform to the usual pattern of the classical concerto... rather the shape of the work emerges organically as each thought leads invariably to the next. A favourite moment of mine is near the end of the first movement where the violins play the opening melody and I weave in and around them with delicate pizzicato.’

Shelley and Edward Gardner create something more mercurial [than Britten's own reading], Gardner conjuring that lithe, high-tension drama he has so successfully achieved with Britten's stage works...We also have a very special reading of the Violin Concerto...Little and Gardner plumb its emotional heart in a performance of great passion and spontaneity.

Gardner's BBC Phil leads the rough-and-tumble with its sharp-edged wind and brusque brass, and the exuberant Howard Shelley matches then every inch of the way...Little has fewer emotionally warm sounds at her disposal than she does energy and commitment...another strong Britten release from Chandos.

This is a desirable Chandos release of two marvellous Britten concertos that deserve to be far better known. The playing from soloists Shelley and Little is exemplary. They are accompanied by the outstanding BBC Philharmonic under Edward Gardner’s sensitively controlled baton.

Little’s interpretation strikes me as one of the finest committed to disc...Even though her partnership with Gardner is new in the work, their dramatic and emotional conception is unified — and particularly arresting in the sizzling central movement’s vivace

Gardner starts Britten’s Piano Concerto with amazing ferocity and drive...Shelley relishes the fast tempo when he makes his entrance...white-hot playing from the BBC Philharmonic and close-up, widescreen Chandos sound.