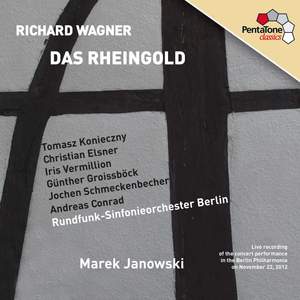 This is superbly recorded, mainly wonderfully played , interestingly conducted and reasonably well sung...dramatically gripping as only a well-conducted Rheingold can be...The best reason for... — BBC Music Magazine, August 2013, 4 out of 5 stars More…

Following on from their recent success at this year’s 2013 BBC Music Magazine Awards where they won the Award for Technical Excellence for their recording of Parsifal, PentaTone is delighted to bring you the next installment, Das Rheingold.

This is the 7th release in PentaTone’s successful Wagner Edition and the 1st one in the Wagner Year. Das Rheingold is the first release of the cycle: Der Ring des Nibelungen. The other 3 “Ring recordings” will follow in the course of 2013.

PentaTone’s Wagner Edition is an unprecedented project and we aim at supporting it with a lot of attention in the media throughout the year. In the Wagner year there will be a lot of attention for Wagner through articles in the media and performances of his opera’s. We expect therefore the interest for the PentaTone Edition (especially as a collector’s item) to increase substantially.

This next release will be supported by advertising in various magazines.

This is superbly recorded, mainly wonderfully played , interestingly conducted and reasonably well sung...dramatically gripping as only a well-conducted Rheingold can be...The best reason for getting this set is the Loge of Christian Elsner...Elsner does not miss a trick in catching all the elements of this complex character, but he never sings less than beautifully.

the real secret ingredient here is the conductor himself...What was a little too calm and remote in the earlier Dresden recording now has real cojones...This is both a great start to Janowski's new Ring cycle and a competitive Rheingold in its own right.

it's the RSOB's playing that steps effortlessly into the limelight. This is a Ring conceived, deliberately, as a musical rather than a theatrical journey...[Schmeckenberger's is] a characterization of awesome dramatic power...After Schmeckenberger, another star of the set is the lyrical, immaculately articulated Loge of Christian Elsner

this Rheingold finds [Janowski] at his best. He uses his preference for fast speeds to his advantage to make the drama buzz along from one exciting episode to another...[the orchestra] take every opportunity to reveal Wagner’s score in all its astounding, delectable colour, as if holding it up to the light for fresh examination.

he fields several outstanding singers from the rising Wagnerian generation ...Above all, this is Janowski’s triumph. His decision to focus on the music at the expense of theatrical ideas has been criticised, but he is vindicated by the gripping, dramatic playing here.

Janowski's dramatic instincts and his ability to obtain orchestral playing of great intensity and presence are as keenly honed as ever – there are some thrilling interludes in this Rheingold...the classiest [vocal] performances come from Günther Groissböck's Fasolt and Iris Vermillion's Fricka.