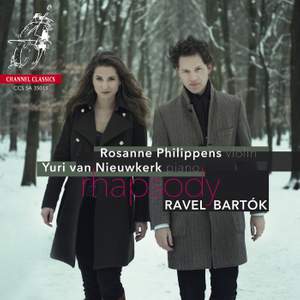 If there's one period to which we feel specially attracted, it's the time when Ravel and Bartók wrote their sonatas and rhapsodies. Music styles from all corners of the world were blowing across the European continent, taking root as folk dances, blues rhythms and exotic melodies in the hearts of classically trained musicians. How very similar to our own situation!

We were formed by Beethoven and Schubert, but with American colleagues, Indonesian forefathers and pop and jazz musicians as close friends our musical world was equally determined by Radiohead, Brad Mehldau and Indonesian gamelan. Bartók and Ravel show us how traditional craftsmanship can be combined with the sounds of other cultures. In their music we can give full rein to our craft, the flame of our ensemble playing and our love for our instruments. At the same time, we recognize in it the groove, the catch in the voice and the raw expression, which captivate us beyond the concert hall. All these elements are brought together in masterly fashion. And so this CD is not only a homage to Ravel and Bartók, but also to the unbounded world of music, in which we both feel free and happy. Enjoy our recording!

Rosanne Philippens & Yuri van Nieuwkerk In 2001 Yuri and Rosanne met at a summer school high up in the mountains of Switzerland. Playing together, it became clear that they had much in common in their musicianship. On returning to Holland they decided to form a duo, and this has been a great success. Today they continue to play together and their musicianship - both as individuals and as a duo - is recognised increasingly. The duo was awarded the Netherlands Programming Foundation Duo Prize at the National Violin Competition, and has broadcast on Dutch classical radio and TV. At the latest Vriendenkrans/het Debuut they won Het Debuut, and with it a grant for further studies and a series of ten concerts at leading chamber music venues in Holland in 2013. The duo has also performed in Switzerland, Germany and Liechtenstein.

The cross-fertilisation certainly produces a pungent programme, played with terrific spirit...These two musicians work instinctively together, knowing just when to assert their pre-eminence and how to respond to one another's interpretative ideas.