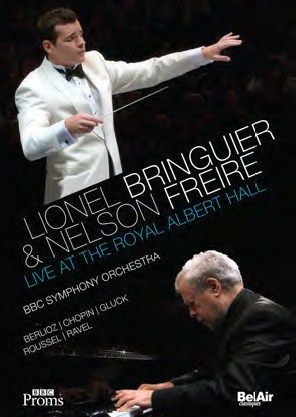 Bringuier's evident penchant for chamber-like clarity reaps rewards in a taut yet genial reading [of the Roussel]...In the midst of their annual Proms marathon, these performances have a start... — BBC Music Magazine, July 2013, 5 out of 5 stars More…

Leading Chopin interpreter Nelson Freire is the soloist in Chopin’s lyrical and brilliant Second Piano Concerto. On the podium the young French conductor Lionel Bringuier makes his Proms debut conducting the BBC Symphony Orchestra and gives a sizzling performance of Roussel’s Symphony No.3 and of Ravel’s score for the ballet 'Daphnis et Chloé' - Suite No 2.

Chopin wrote his concerto at the age of 19 while crazily in love with an opera singer, but it's the work itself which is the object of adoration for soloist Nelson Freire who describes himself as having something of a 'crush' on the piece after first hearing it as a teenager.

The three other works on the programme chart French music over a century of changing musical tastes, beginning in 1844 with Berlioz's vivid evocation of a swashbuckling pirate adventure in his overture 'Le corsaire'. By 1912 the tides of modernism influenced Ravel's lavishly scored, pastoral ballet Daphnis and Chloë, with its famous opening soundscape of dawn breaking over the forest canopy, and by the 1930s Roussel's Third Symphony reflected the trends of neo-classicism.

"It was around the beginning of the second movement of Albert Roussel's Third Symphony that the playing of the BBC Symphony Orchestra – under the outstanding 23-year-old French conductor Lionel Bringuier, making his Prom debut – moved into top gear. From that point on, the orchestra's awareness of its own sound, collectively and individually, became heightened to an unusually compelling degree. The playing stayed on this exalted level until the end of the concert, which closed with Ravel's second Daphnis and Chloé suite...shaped with a certainty of direction that never compromised the music's inherent sensuousness. It provided a sensational climax to the evening."

Bringuier's evident penchant for chamber-like clarity reaps rewards in a taut yet genial reading [of the Roussel]...In the midst of their annual Proms marathon, these performances have a start of season freshness...Freire's playing is heartfelt, but with a lightness of touch and apparent effortlessness that is the product of true virtuosity.

the least flashy of virtuosos, [Freire] conjures up a phenomenal palette of colours by the most economical means. I would urge anyone to hear this performance with Bringuier...You can sense even the oldest, most cynical hands in the band responding to his charismatic direction with enthusiasm...All in all, a tremendous concert.

If it was a bold idea to invite this young French conductor to the BBC Proms, it was surely madness to film the concert. But thank goodness the BBC and innovative label BelAir took the chance, as this is a model of filmed music-making. Bringuier’s rapport with the orchestra (and with soloist Nelson Freire here on scintillating form) is immediately evident. Thoroughly recommended.