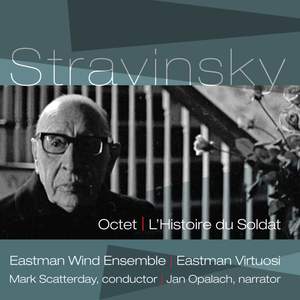 Music to Scene I

Triumphal March of the Devil

Under the baton of conductor Mark Scatterday, the Eastman Wind Ensemble celebrates its 60th anniversary with its first recording for Avie, a superb reading of Stravinsky's Octet, while the Eastman Virtuosi, with narrator Jan Opalach, deliver a devilish rendition of L'Histoire du Soldat.

Harking back to a golden era in recording, when the ensembles of the Eastman School of Music under the baton of the legendary Frederick Fennell made dozens of pioneering recordings for Mercury Living Presence, the Eastman Wind Ensemble celebrates its 60th anniversary with its first recording for AVIE Records featuring two seminal works by Stravinsky. The composer's music figured early on in the EWE's history - his Symphonies for Wind Instruments was performed in 1951 on a programme conducted by Frederick Fennell that led to the establishment of the Eastman Wind Ensemble. And in 1966, at the age of 83, Stravinsky made his one and only visit to the Eastman School of Music, overseeing performances of several of his works.

Under Mark Scatterday, who continues in the prestigious lineage as only the fourth conductor in the EWE's history, the superior student ensemble performs Stravinsky's Octet, while Eastman Virtuosi, made up of the Eastman School's renowned faculty members, turn in a devilishly fine rendition of A Soldier's Tale. Jan Opalach delivers an exceptionally nuanced narration as well as portraying the folk tale's two protagonists, Joseph the solider and the Devil.

Stravinsky's music requires very exact balance, something scrupulously caught in these performances and the efficient recordings.

Avie has recorded them in an intimate, dryish space at the Eastman School of Music in New York, recalling the atmosphere on the old Robert Craft Stravinsky discs, but the playing is more sharply focused than one recalls from that era.