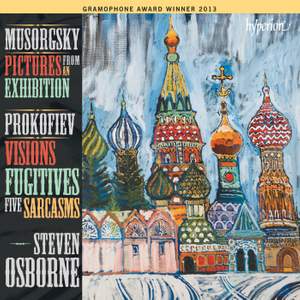 Throughout this enthralling and warmly recorded performance, Osborne maximises colour and atmosphere, yet manages to achieve a freshness of approach without recourse to idiosyncratic mannerisms.... — BBC Music Magazine, March 2013 More…

Part 09: No 5. Ballet of the unhatched chicks

Part 10: No 6. Two Polish Jews, one rich, the other poor (Samuel Goldenberg and Schmuyle)

Part 14: No 8b. Con mortuis in lingua mortua

Recording of the Week,  Steven Osborne plays Mussorgsky's Pictures at an Exhibition

Osborne’s journey through Mussorgsky’s gallery proves a highly intelligent, thoughtful interpretation that aims to be more than just a showy series of programmatic events.

Steven Osborne has become one of the most valuable pianists recording today. His recent complete Rachmaninov Preludes release was critically acclaimed as the greatest modern version since Ashkenazy. Now he turns to further cornerstones of the Russian repertoire in this recording of Musorgsky’s Pictures from an Exhibition (a work which has been in Osborne’s concert repertoire for many years), and two sets of Prokofiev’s miniatures.

Musorgsky’s masterpiece is one of the most popular programmatic works of the 19th century. Yet it is also a great pianistic challenge, with the spectacular textures of the climactic movement ‘The Great Gate of Kiev’ requiring the highest technical accomplishments.

David Fanning writes of Prokofiev’s Visions fugitives: ‘Prokofiev supplies snapshots of his most characteristic moods—sometimes grotesque, sometimes incantatory and mystical, sometimes simply poetic, sometimes aggressively assertive, sometimes so delicately poised as to allow the performer and the listener to make up their own minds.’ Osborne’s subtle, yet brilliant use of colour and characterization makes him the ideal performer of this set. Sarcasms—as befits the title—is an experimental, provocative work, performed by Osborne with biting humour.

Throughout this enthralling and warmly recorded performance, Osborne maximises colour and atmosphere, yet manages to achieve a freshness of approach without recourse to idiosyncratic mannerisms. Every movement is brilliantly characterised as a result of Osborne's imaginative approach to keyboard texture.

Osborne's sensitive, dynamic recording is a joy...He gives us elegantly arched and flowing phrases, an effortless handle on the many virtuosic demands, and a nuanced, sympathetic touch that produces deft, light vivaciousness one moment and firm sobriety the next...In short, the beauty and variety of Mussorgsky's Pictures are presented in all their glory here

here, once more, is an ideal blend of fidelity to the score, with a subtle and distinctive rather than overbearing musical personality. In the Musorgsky everything is as musicianly as it is technically immaculate....in the more weighty numbers, there is power without brutality so that what so easily degenerates into a mere uproar is so finely graded that you forget the essentially percussive nature of the writing.

Following the piano score while listening to Osborne’s recording, one will see that the pianist meticulously carries out Mussorgsky’s instructions as to tempo, pedalling, and dynamics. However, more than that, he characterizes each of the movements very well, too.

his care over the smallest details of phrasing and articulation throughout suggests a highly intelligent, thoughtful interpretation that aims to be more than just a showy series of programmatic events...The range of dynamics Osborne achieves is also really quite something, from the relentless fff of Bydlo to the hushed pianissimo of the catacombs in Con mortuis in lingua mortua.

The great virtue of Osborne’s magisterial performance is that you never miss the orchestral upholstery — he conceives the work in quasi-orchestral terms, lavishing an astounding palette of colour and moods on the various pieces...The experimental Prokofiev pieces, Visions fugitives and Sarcasms, are dazzlingly done.

He paces Mussorgsky's great suite faultlessly, never forcing anything, but ratcheting up the excitement notch by notch until it's all discharged in a sumptuous account of the final Great Gate of Kiev...Osborne is suitably laconic and severe in the Sarcasms, gentler and more suggestive in the Visions Fugitives; both are beautifully judged.

Osborne strides out with healthy determination in the opening Promenade, and then gives a superb performance that shows how atmospheric Musorgsky’s maverick piano writing can be...Osborne has the sensitivity and inspiration, not to mention the pianistic resources, to bring each of the pictures to life in a way that has palpable perspective and subtle characterisation.

resplendently startling, cobwebs blown off...From the beginning you sense Osborne’s dynamism and fresh imagination: I can’t recall when I last heard the introductory Promenade sound so purposeful. But the best jewels reside in the picture segments themselves...the technical challenges of the cycle’s last movements (Catacombs, Great Gate of Kiev and all) bring plenty of virtuoso excitements, vividly captured in the recording.