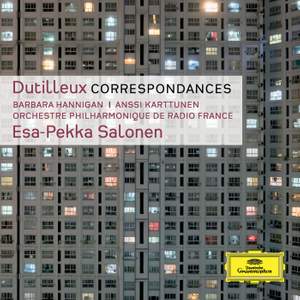 Here is an oeuvre, not only of precise, masterly workmanship, but infused with emotional warmth and, beyond that, with profound passions, evidenced not least in Dutilleux's sympathy for the persecuted...Hannigan... — BBC Music Magazine, May 2013, More…

Dutilleux: Correspondances for Soprano and Orchestra

Dutilleux: The Shadows of Time

This remarkable album was released on the 97th birthday of a composer who, over more than seven decades, had a profound influence on classical music. Born in 1916 and best known for his Violin Concerto, Henri Dutilleux continued the line of great masters of French music.

The album is a tribute to the composer by his former composition pupil, conductor and composer Esa-Pekka Salonen, Music Director Laureate of the Los Angeles Philharmonic.

Dutilleux’s Correspondances (2003), a song cycle for soprano and orchestra, setting texts by Rainer Maria Rilke, Prithwindra Mukherjee, Aleksandr Solzhenitsyn and Vincent van Gogh, has never been recorded. The composer asked his former pupil to record the work, while he could still attend the sessions – which he did – making this World Premiere recording a document of historical significance

The album also includes new recordings of Tout un monde lointain for Cello and Orchestra (1970) and the orchestral piece The Shadows of Time (1997).

Here is an oeuvre, not only of precise, masterly workmanship, but infused with emotional warmth and, beyond that, with profound passions, evidenced not least in Dutilleux's sympathy for the persecuted...Hannigan is simply superb - faultless pitching, crystal clear words, a shining tone and total empathy with the composer's message...Throughout, Salonen and the orchestra do the composer's music proud. Bravo to all for a quite exceptional disc.

Hannigan has made the music very much her own...a wonderful 97th birthday present for a musician who has patiently extended older French traditions of civility and high polish into an age of aesthetic meltdown.

Hannigan’s singing is heartbreaking...[Karttunen] may not be as dramatic as [Rostropovich], but he gives an eloquent account. His playing high in the register is particularly beautiful and he captures all the detail...It is rather early to say, but I am confident this CD will be at or near the top of my list of recordings of the year.

Salonen does these three masterpieces (1997’s The Shadows of Time and the 1970 cello concerto Tout un monde lointain are the others) magnificent justice. In the 2003 title work, a close engagement with texts (by Rilke et al) is formidably reflected in Barbara Hannigan’s soprano singing.