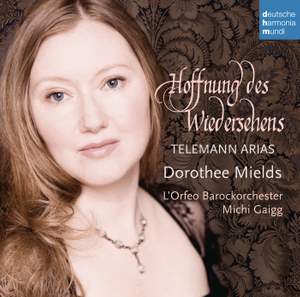 Her vocal quality, secure intonation and tasteful use of ornamentation characterise performances that are further enhanced by her sensibility to music and text like. This attractive disc is no... — BBC Music Magazine, August 2013, 5 out of 5 stars More…

Telemann: Concerto in D Major for Violin, Strings and Continuo from Nebucadnezar, TVWV 22:6

Georg Philip Telemann (1681-1767) was a German Baroque composer and multi-instrumentalist. Self-taught, he became a composer against the wishes of his family. He was one of the most prolific composers in history and was considered to be one of the greatest composers of his day. His music is an important bridge between late Baroque and early Classical styles.

Dorothee Mields is one of the leading interpreters of C17th and C18th music and is feted by audiences and critics alike for her unique timbre and moving interpretations with her flawless technique and the ethereal clarity of her voice.

The L’Orfeo Baroque Orchestra, founded in 1996, is a leading ensemble in the field of historical performance and has a special fondness for the music of Telemann. It is conducted here by its Austrian founder and leader, Michi Gaigg, a former student of acclaimed, Gramophone Award-winning conductor, Nikolaus Harnoncourt.

Texts and translations are included.

Her vocal quality, secure intonation and tasteful use of ornamentation characterise performances that are further enhanced by her sensibility to music and text like. This attractive disc is no mere litany of arias extracted from larger works, but a thoughtfully constructed programme...A delight from start to finish.

It is hard to think of a better specialist German Baroque soprano than Mields at the moment; her flawless tone, awareness of instrumental interplay, delivery of poetry and shapely phrasing provide nothing but undiluted pleasure.