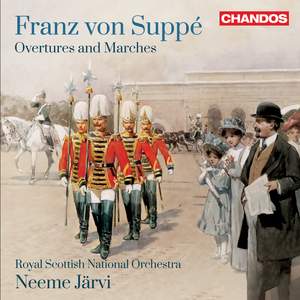 What other composer created such a body of rousing, exhilarating and immensely tuneful pieces?...Järvi and his Scottish players provide more than just a touch of extra precision and zip. Järvi... — Gramophone Magazine, May 2013 More…

Francesco Ezechiele Ermenegildo, Cavaliere Suppé-Demelli, or as he is more commonly known today, Franz von Suppé, was born in Spalato (Split), then part of the Austrian Empire, to parents of Italian / Belgian and Austrian descent. Although discouraged from a musical career from an early age, Suppé received encouragement from a distant yet illustrious relative, the great Italian opera composer Donizetti. By the 1840s Suppé had carved for himself a successful niche as a composer for the stage, and over the four decades that followed there was rarely a year without a new stage work from him.

Although the bulk of his operas and operettas have sunk into relative obscurity, his bright and colourful overtures have survived. Suppé was often referred to as ‘the Viennese Offenbach’, and in fact he was responsible for introducing many of Offenbach’s operettas to the Austrian capital. The Beautiful Galatea was among his first efforts in the style of Offenbach, Suppé here taking on the French composer’s La Belle Hélène.

Also on this disc are the overtures to Poet and Peasant, perhaps Suppé’s most familiar, and Boccaccio which is widely regarded as Suppé’s finest work for the stage, based very loosely on the life of Giovanni Boccaccio (1313 – 1375), the Florentine author of the Decameron.

It would seem that wars and musical comedy often go hand in hand, perhaps partly for the purpose of deflating military pomposity. Several of Suppé’s operettas are in this vein, including Light Cavalry, The Jolly Robbers, Isabella, and, a major success, Fatinitza, all of which feature military plots in some form.

Last, but not least, this disc features Suppé’s overtures to A Morning, Noon, and Night in Vienna, The Queen of Spades, Donna Juanita, and The Model, several operatic marches, the concert march Up Hill and Down Dale, and the Humorous Variations on the beloved Student Song ‘Who comes from afar?’.

The works are performed by the Royal Scottish National Orchestra under Neeme Järvi, who in 2012 celebrated his thirty-year recording career with Chandos Records.

What other composer created such a body of rousing, exhilarating and immensely tuneful pieces?...Järvi and his Scottish players provide more than just a touch of extra precision and zip. Järvi indeed seems born to direct this music

The performances are always alert, sharply focused and carefully balanced, with tempi well chosen. I do however sense a lack of the kind of commitment and sharpness of characterisation that is found in the best of earlier discs of this material...I would not wish to exaggerate my concerns. It is certainly a well chosen, well recorded and well annotated collection, played with enviable precision