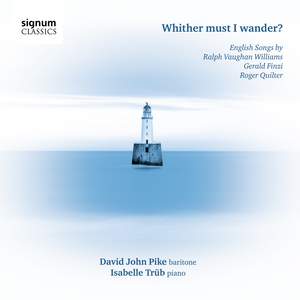 Whither must I Wander?

a rising young baritone with a powerfully operatic voice. Supported by Isabelle Trüb's acommpaniments, often rather more assertive and colourful than reticent Brits expect, he gives the Songs... — BBC Music Magazine, April 2013, 5 out of 5 stars More…

Whither Must I Wander?

Bright Is the Ring of Words

I Have Trod the Upward And the Downward Slope

I Got Me Flowers

Fear No More the Heat O' the Sun

It Was a Lover And His Lass

Vaughan Williams: Blackmwore by the Stour

Centred around Vaughan Williams' 'Songs of Travel', this collection of English song brings together three now influential figures in the world of British music – Vaughan Williams, his contemporary (in age rather than compositional approach) Roger Quilter, and the younger Gerald Finzi (whose work 'Let us Garlands Bring' was composed to mark RVW's 70th birthday). The texts used are drawn from a variety of sources: from traditional 'Dorset' songs, through settings of Shakespere, to the central song-cycle of poetry by Robert Louis Stevenson.

Baritone David John Pike has a widely varied repertoire covering early music, oratorio, symphonic, opera and commissioned works. In his native Canada, in the UK and across Europe, he has worked with leading ensembles including Glyndebourne Festival Opera, Academy of St. Martin-in-the-Fields, London Philharmonic and the Schweizerkammerchor under the direction of Christophers, Dutoit, Jurowski, Marriner, Mehta, Rattle and Zinman. He now has a growing reputation as an operatic and concert soloist.

a rising young baritone with a powerfully operatic voice. Supported by Isabelle Trüb's acommpaniments, often rather more assertive and colourful than reticent Brits expect, he gives the Songs of Travel a distinctively dramatic edge...It's already had the good word from Sir Thomas Allen, and no wonder.

It is a real pleasure to make the acquaintance of David John Pike on this quite superb recording. The singer has all the qualities that one looks for in this repertoire: a well-focused and steady delivery, imaginative response to the text, and a real sense of legato.

[Pike] has a powerful, generous and malleable voice, that he puts to use with rare sensitivity...Trüb shows great sensitivity and admirable flexibility in the colours of her piano accompaniment, never ceasing to explore all the psychological finesses.

a baritone with pithy, but warm, rounded, never hard intonation, a piano accompanist who follows suit perfectly, music full of temperament, plus a accompanying personal note from the singer...Most impressive perhaps are the fresh and lively interpretations that make one forget that this is a studio production.

With the congenial accompaniment of pianist Isabelle Trüb he achieves a degree of emotional penetration not necessarily obvious with this repertoire. Pike finds the right voice, the right tone, for every song. A further strength is the warmth of his pleasantly nutty, powerful voice, calm breath control, a beautiful legato and good mastery of the mezzovoce.