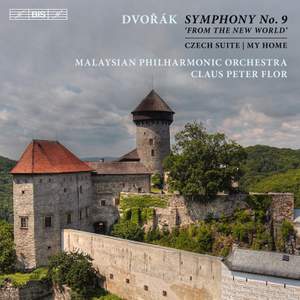 the performance as a whole displays such unfailing purpose, sensitivity and freshness of new discovery that I felt I was encountering the music for the first time...The SACD sound throughout... — Gramophone Magazine, February 2013 More…

Following their acclaimed recordings of Dvořák’s Symphonies Nos. 7 and 8, Claus Peter Flor and the Malaysian Philharmonic Orchestra come to his Symphony No.9 ‘From the New World’.

Since its première, Symphony No. 9 has remained one of his most popular works. It was composed in America and, in the words of the composer, uses ‘simply written original themes embodying the peculiarities of the Indian music’, developing them ‘with all the resources of modern rhythms, harmony, counterpoint and orchestral colour.’

Dvořák performed the overture Můj domov (My Home) at the Czech première of the Ninth. Part of the incidental music for a play, the overture is based on two popular songs, one of which, Kde domov můj (Where Is My Home), would later become the Czechoslovakian national anthem.

Another of Dvořák’s ‘nationalistic’ works appears here – the light-hearted Czech Suite, consisting of five movements, all based on the dance rhythms of Bohemia, Moravia and Central Europe.

the performance as a whole displays such unfailing purpose, sensitivity and freshness of new discovery that I felt I was encountering the music for the first time...The SACD sound throughout is superb, gloriously ripe, most judiciously balanced...I derived enormous pleasure from this release and feel sure you will too.

this will be one for collectors of the series, and I can guarantee it doesn’t disappoint on any level...I love the orchestra’s clean sound and rich resonance, the strings are silky smooth, winds musical and tastefully stylish in terms of vibrato, the brass superbly tuned and powerful where power is demanded.