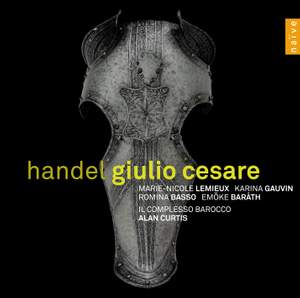 if all ears were once on the Egyptian seductress Cleopatra, now they are focused on the grieving Roman widow Cornelia...Curtis presents a Giulio Cesare that is as volatile and ambiguous as Mozart's... — BBC Music Magazine, March 2013, 4 out of 5 stars More…

Following the much-loved 'Streams of pleasure' album, this is the second recording resulting from the collaboration between Marie-Nicole Lemieux, Karina Gauvin and Alan Curtis' Complesso Barocco. This studio recording followed a successful tour in Europe in Autumn 2011 of France, Germany and Austria.

Headed by Marie-Nicole Lemieux and Karina Gauvin in the principal roles, the full vocal cast is amazing: Emöke Barath, Romina Basso, Johannes Weiser... Once again, Alan Curtis shows why he is considered one of the finest exponents of Handel's music.

if all ears were once on the Egyptian seductress Cleopatra, now they are focused on the grieving Roman widow Cornelia...Curtis presents a Giulio Cesare that is as volatile and ambiguous as Mozart's Don Giovanni. Il Complesso Barocco's articulation is vigorous and incisive...Lemieux plays Cesare as a man made foolish by love...This is not the definitive Giulio Cesare - but it does advance the debate around a much loved, little understood masterpiece.

Judiciously paced recitatives are accompanied unobtrusively and always permit the poetry to flow with the utmost clarity...Curtis wisely pays attention to Handel's tempo markings...There are no weak links vocally. Marie-Nicole Lemieux is a dependable Cesare and Karina Gauvin is an eloquent, steely Cleopatra. Emoke Barath's Sesto is ideally fresh-voiced and Romina Basso is a perfect fit for Cornelia

excellent singers, without a weak link … this Giulio Cesare is a welcome addition to this wonderful opera’s now substantial discography

Lemieux uses her exciting coloratura with psychological insight and, importantly, accuracy...However, the voice is wonderfully sensual for the love music...Gauvin is all feminine sensuality...As always, though, it is Curtis that holds the whole show together. He approaches this, as with his other Handel recordings, with fresh eyes and ears so as to reawaken us to how effective this opera can be for our own time