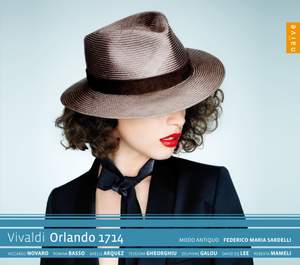 Only two of the opera's three acts have survived...Sardelli's reconstruction is thoroughly convincing and he has assembled a first-rate cast to prove it...Notwithstanding incompleteness, this... — BBC Music Magazine, March 2013, 5 out of 5 stars More…

Naïve are delighted to announce the world premiere recording of 'Orlando Furioso', the 1714 version. It scored a huge success at the Teatro San Angelo in Venice, where it was directed by none other than Vivaldi and his father. The manuscript, rediscovered 250 years later in Vivaldi’s personal library, now in Turin, was thought to be a revision of an existing 'Orlando' of 1713 by Bolognese composer Ristori. However, the musicologists in charge of the numbering of the works of Vivaldi, Peter Ryom and his successor Federico Maria Sardelli, wondered why Vivaldi should have kept this music in his personal corpus among all his other scores, and noticed that the manuscript featured many different hands and numerous pasted-in corrections of the parts. Sardelli observed obvious similarities between the arias of this 'Orlando' and those of the first two operas of which Vivaldi was the official composer. His intuition was confirmed by the analysis of Reinhard Strohm, a leading expert on 18th-century opera, and the entire musicological community: this music is definitely by Vivaldi!

'Orlando furioso' of 1714 now achieves a new lease of life under a catalogue number that has just been assigned to it: RV 819. Only two acts have survived and Orlando is sung by a baritone, unlike the 1727 version. The 47th Vivaldi Edition recording and 13th opera, this first recording is performed by an outstanding range of soloists: Riccardo Novaro, Romina Basso, Roberta Mameli, Delphine Galou and David DQ Lee - don’t miss his breathtaking aria “Piangero” [Act 2, Sc.5].

Only two of the opera's three acts have survived...Sardelli's reconstruction is thoroughly convincing and he has assembled a first-rate cast to prove it...Notwithstanding incompleteness, this is one of the most rewarding performances in the Naive Vivaldi opera survey.

this recording presents Sardelli's editorial completion...Consequently, Modo Antiquo's spirited performance cannot be experienced as a coherent dramatic whole, but it is to the credit of the performers that they strive for dramatic convention...Sardelli's conscientious experiment opens up an intriguing new perspective into Vivaldi's encounter with a story to which he would return in 1727 for his famous masterpiece.

Sardelli has done a remarkably convincing job...Galou has a golden depth of tone and is one of the few singers here who sometimes withholds her natural vibrato for expressive purposes. Soprano Teodora Gheorghiu brings some welcome dramatic excitement...Most importantly, though, there's some excellent music by Vivaldi which is complete and unique to this opera...All in all, a triumphant musical resurrection.

Novaro's voice is especially warm on high E and F, just where so many baritones have registral difficulty. He shines in a long scene of recitative when Orlando is trapped in a cavern...the continuo players are dramatically attuned without being showy...[Gheorghiu] is a heroine with real strength...Sardelli does a beautiful job, making it appear that the characters are running the show.