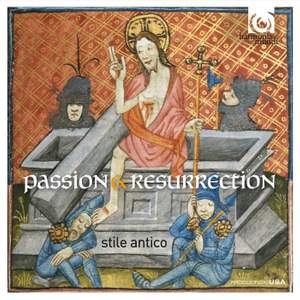 The McCabe piece...is beautifully tailored to the 12 voices of the choir. Although fiendishly difficult to perform, they manage it with superb poise and great dynamic sensitivity and projection.... — BBC Music Magazine, Christmas 2012, 4 out of 5 stars More…

Gibbons, O: I am the Resurrection and the Life

Texts inspired by the dramatic events of Holy Week and Easter, set to music by some of the greatest Renaissance composers are the basis of this new hybrid SACD from Stile Antico. Included are two settings of the poem 'Woefully arrayed': the first by William Cornysh, the second composed for Stile Antico in 2009 by John McCabe (b. 1939). This is its first recording and Stile's first foray into contemporary music.

Stile Antico is the benchmark ensemble of young British singers, working without a director and conducting much of their own artistic research for their programmes and concise, yet entertaining booklet notes. Much in demand in concert, the group performs regularly throughout Europe and North America. Their recordings on harmonia mundi have enjoyed great success, winning awards, including the 2009 Early Music Gramophone Award for Song of Songs.

Their performances have repeatedly been praised for their vitality and commitment, expressive lucidity and imaginative response to text. Stile Antico’s recent engagements include débuts at the BBC Proms, London’s Wigmore and Cadogan Halls, the Amsterdam Concertgebouw, early music festivals in Boston, Bruges, Barcelona and Utrecht, and at the Cervantino Festival in Mexico. The group has toured extensively with Sting, appearing across Europe, Australia and the Far East as part of his Dowland project 'Songs from the Labyrinth', and is regularly invited to lead courses at Dartington International Summer School.

The McCabe piece...is beautifully tailored to the 12 voices of the choir. Although fiendishly difficult to perform, they manage it with superb poise and great dynamic sensitivity and projection. Clearly this is a group that can sing in tune, mantain its balance and enunciate words clearly.

Stile Antico are probably at their best when the music invites them to sing out. The preference for a choral over a chamber music sound is clearly deliberate (as is the slow tempo adopted for the more solemn English pieces).

The run-up to Christmas seems hardly the most propitious time to release an Easter-themed anthology of choral music, but regardless, Passion &amp; Resurrection is to be welcomed both for its skilled execution, and for clever programming

The performances are second to none, rivetingly presented with all the skill of master musicians who have been doing this for years—the miracle is that they are all young, and yet still are able to penetrate the essence of these wonderful works. Need I say more?