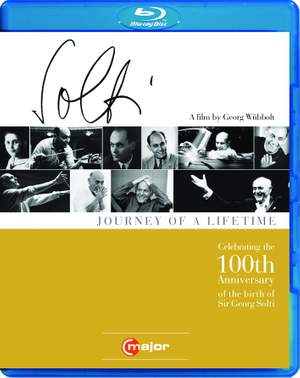 Solti: Journey of a lifetime

Talking heads opine that Solti's career only soared after Bohm retired and Karajan died...it does provide some remarkable anecdotes...such as Solti becoming great cronies with Theodor Adorno...Most... — BBC Music Magazine, May 2013, 4 out of 5 stars More…

This fantastic documentary, from the director of the very successful DVD Carlos Kleiber - I am lost to the world, celebrates the 100th birthday of Sir Georg Solti. He was one of the 20th Century’s most brilliant conductors and a leading figure of musical culture world-wide.

The documentary follows the Hungarian-Jewish conductor’s career: As Toscanini’s assistant at the Salzburg Festival, as Music Director in Munich and Frankfurt after the war, achieving world-wide fame with his legendary recording of Wagner’s Ring cycle. It was as the long-serving Music Director at the Royal Opera House, Covent Garden, and of the Chicago Symphony Orchestra that Solti became an international start of classical music.

These stops form the central points of the film. Many great musicians like Valery Gergiev and Dohnànyi have great memories to share.

Talking heads opine that Solti's career only soared after Bohm retired and Karajan died...it does provide some remarkable anecdotes...such as Solti becoming great cronies with Theodor Adorno...Most significantly, though, this also includes a solid sample of everyday Solti.

Solti is a documentary director's dream...there is always so much to look at even when he's sitting still..There is much skilfully sequenced archive footage...even if the director finds it hard to linger on his subject doing what he did best.

Contributions are intelligent and interesting and there is thankfully little by way of padding. There is some linking narration and the occasional musical extract...I found the 52 minutes of this film compulsive viewing and was only sorry there wasn't more of it.