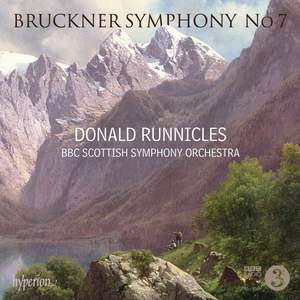 Runnicles's debut recording for Hyperion is a very impressive achievement. He has established a strong rapport with the BBC Scottish Symphony Orchestra, inspiring them to deliver playing of great... — BBC Music Magazine, January 2013, 5 out of 5 stars More…

Hyperion is delighted to present Donald Runnicles, chief conductor of the BBC Scottish Symphony Orchestra, in his debut on the label. Runnicles commands his orchestra in Bruckner’s most popular symphony—repertoire that is at the heart of his musical life, and in which he has few living equals. Recent concerts of the works of Bruckner and Wagner have received the highest critical praise, acknowledging the orchestra and their conductor as consummate performers of this music.

‘For an orchestra who hadn’t played Bruckner 7 since 1975, the BBCSSO sounded utterly on home territory. From the sumptuous opening cello theme to the finale’s noble fanfares, this was a spacious, tender and beautifully poised performance … it’s not often you hear cries of “encore” after a Bruckner symphony, but I would gladly have heard this one repeated in full’ (The Guardian)

Runnicles's debut recording for Hyperion is a very impressive achievement. He has established a strong rapport with the BBC Scottish Symphony Orchestra, inspiring them to deliver playing of great refinement and emulating the burnished tones that are more often associated with Central European orchestras...Highly recommended.

the defining character of [Runnicles's] Bruckner on this showing is the singing fluency of the line. Everything has shape and purpose and a naturalness of phrasing...Those who favour a grander, more expansive, more monolithic approach to this music may find the scale of Runnicles's reading a shade diminishing. But be in no doubt that it is thoughtful and radiant and and eminently musical

At the start of the symphony I like the nice, natural flow of the music as the wonderful first subject unfolds. Runnicles doesn’t tarry neither does he push the music too fast; there’s a proper sense of space and it seems to me that Runnicles achieves a judicious balance between breadth and forward movement. Jumping ahead for a moment, I came to feel that this was the case for his view of the score as a whole.

The central European tradition of Bruckner interpretation is still bedevilled by inauthentic tempo changes and by ritardandos that clog the flow of the composer’s mighty outpourings. One of the strengths of this resplendent account of the Seventh is its refusal to take any notice of such impertinences

Runnicles’s proven Wagnerian credentials serve this performance handsomely, and he achieves wonders with an underrated BBC Scottish Symphony Orchestra who hadn’t played the piece for decades. This is world class playing ...Hyperion’s sound and documentation are flawless.