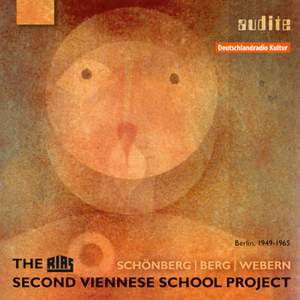 Hard to exaggerate the richness of these four CDs...Irmen Burmester insightfully takes the Sprechstimme in a vivid Pierrot lunaire...[Stadlen] is a commanding soloist in Schoenberg’s Piano Concerto — Sunday Times More…

Part I: No. 4. An Ethereal Washerwoman

No. 2. Hain in diesen Paradiesen

This 4-CD boxed set presents historic recordings of works by Arnold Schoenberg, the founding father of 20th-century modern music, and his most prominent pupils, Alban Berg and Anton Webern.

These recordings, made between 1949 and 1965, comprise works which were written between 1906 and 1950, thus portraying practically the entire era of the Viennese School. Not only do they trace the multi-layered compositional developments of the Viennese School, but they are also significant musical and historic documents of multi-faceted interpretational approaches towards this music.

The Viennese School was formed before the First World War as a movement in music attempting to unite radical expressive techniques and traditional form concepts, demanding specially trained interpreters for this undertaking. In these RIAS recordings, first-rate artists from the circle of the three Viennese composers can be heard: Rudolf Kolisch, Eduard Steuermann, Winfried Zillig and Else C. Kraus were immediately shaped by their teacher, Schoenberg, whereas others, such as Peter Stadlen and Tibor Varga were in contact with the composer, or with Webern or Berg. Ferenc Fricsay or Suzanne Danco, on the other hand, did not belong to the circle of the Viennese School and its performance teachings. Their interpretations are of particular interest as they brought these works to life, unprejudiced by performance traditions of this music which, at that time, was hardly performed.

The comparison of the two recordings of Schoenberg’s 'Fantasy for Violin and Piano', Op. 47, with Kolisch and Varga respectively, and the sensational interpretation of Schoenberg’s 'Pierrot Lunaire' by the Munich singer Irmen Burmester alongside an outstanding instrumental ensemble under the direction of Josef Rufer (1949) are particular highlights of this anthology.

These radio recordings were made possible thanks to the indefatigable initiative of the music writer Hans Heinz Stuckenschmidt in his role as Editor of New Music at the RIAS. He and his colleague Josef Rufer, who can be heard as conductor, ensured that those musicians who had returned from exile would be engaged to contribute to these radio documents. By doing so, Stuckenschmidt and Rufer intended, on the one hand, to continue the tradition of Schoenberg’s stay in Berlin from 1925 until 1933, and, on the other hand, to provide the music of the Viennese School with greater resonance within public awareness.

This edition is complemented by the publication of a text by Prof Dr Rudolf Stephan, the doyen of research into the Viennese School in Germany after the Second World War and editor of the complete works of Arnold Schoenberg and Alban Berg. He reflects on his comprehensive experiences with the music of the Viennese School, stretching back to the years immediately following the end of the war.

Hard to exaggerate the richness of these four CDs...Irmen Burmester insightfully takes the Sprechstimme in a vivid Pierrot lunaire...[Stadlen] is a commanding soloist in Schoenberg’s Piano Concerto