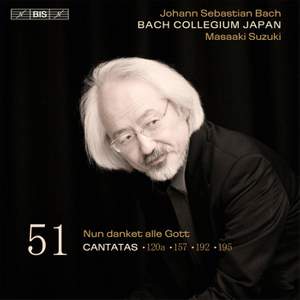 These sacred occasional pieces are independent works and did not form part of his cantata cycles for the Sundays and feast days of the church year. Two of cantatas (BWV 195 and BWV 120a) were intended for wedding ceremonies, and one for a funeral (Ich lasse dich nicht… BWV 157), but the setting for the fourth piece, Nun danket alle Gott, BWV 192, is unknown.

The cycle of cantatas initiated by Masaaki Suzuki and Bach Collegium Japan in 1995 is nearing completion, with four volumes to come. Volume 50 was acclaimed by reviewers who praised the continued high quality of interpretation and performance.

[BWV 157] contrives a ravishing foil to all the nuptial exuberance. Its tenor aria is elegantly turned by Christoph Genz...Suzuki's customary transparent springiness, sensitivity and almost feline gracefulness ensure a trousseau of sophisticated delights.

Suzuki and his well-honed forces lavish at least as much loving attention on them as usual...Fluently stylish and idiomatic, the performers live and breathe Bach's music with as much immediacy as if it had been composed yesterday...one of the very best and most joyful in the series so far.

Suzuki accords these works the same level of respect as Bach did, consistently striking the right balance between either joyous celebration or sober reflection and a controlled dignity proper to the occasions they adorned. His choir and orchestra perform lovingly as ever, phrasing with profond taste and intelligence, and benefitting from sound and balance judged to perfection.

Even by the standards of Suzuki's continuing cantata series...this is an outstanding release...The duets of BWV 192 and 157 are deftly done, while the dense and complex choruses of BWV 195 are utterly stunning.