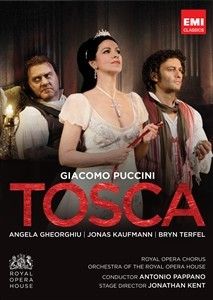 It is no exaggeration to say that the two performances of Tosca at the Royal Opera House in July 2011 - with Angela Gheorghiu, Jonas Kaufmann and Bryn Terfel as the leads - were opera history in the making and by far the hottest tickets in town.

For the majority of us who weren’t lucky enough to be there, it has been captured on this DVD, exclusively released by EMI.

Pappano's mastery of Puccinian pace and phrasing intensifies this turbulent score's onward surge, but he's also noticeable attentive to his singers...[Kaufmann's] cries of 'Vittoria!' are thrilling...and his acting never slackens...Tosca's mercurial character seems to resonate with [Gheorghiu] naturally...There are some decent Toscas on DVD already, but I'd start here.

Gheorghiu makes a credible character out of Tosca...her voice keeps its beauty at all but the most high-pressure moments...Kaufmann scores a complete success as Cavaradossi...What he lacks in Italianate open tone, he makes up in brooding, dark colours...Neither of them would be likely to get the better of Bryn Terfel's bully of a Scarpia...The other dominant personality is Antonio Pappano, whose Puccini has never sounded better

Jonas Kaufmann as Cavaradossi sings perhaps one of his greatest roles: E lucevan le stelle is unbelievably moving, and his cry of "Vittoria! Vittoria!" is guaranteed to make your hair stand on end! Angela Gheorghiu is a passionate Tosca, and Bryn Terfel unctuously oozes sleaze in a chilling portrayal of Scarpia.