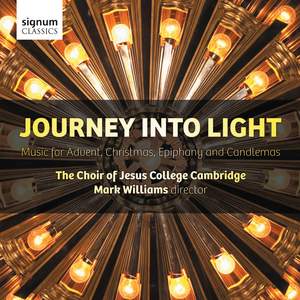 McKie: We Wait for Thy Loving Kindness

Hadley, P: I sing of a maiden

Rutter: Hymn to the Creator of Light

A new festive release from the Choir of Jesus College Cambridge under their director Mark Williams – with additional performances from organists Robert Dixon and Timothy Lambourn, and trumpeter Rebecca Crawshaw. The programme is drawn from pieces for the festivals of Advent, Christmas, Epiphany and Candlemas: "Of the annual Christian seasons, it is surely that from Advent to Epiphany which inspires believer and non-believer alike the most: the believer celebrates Christ’s birth whilst the non-believer considers hopes for rebirth and renewal as a New Year approaches … If aspirations surrounding the arrival of a new born child are universal, the Christmas music chosen here reflects the season’s inspiration through quite recent compositions, alongside music from the early part of the 20th century." Mark Williams

a disc of mainstream Christmas music...which showcases the combined forces of the college's chapel choir, with its top line of boys, and the mixed-voice college choir. It's a performance of full, rich sounds from a group who are among the unsung heroes of a collegiate choir circuit currently dominated by the larger colleges.

This is an attractive and very well-planned disc of music from Advent to Epiphany … The sound is unobtrusively excellent and the booklet includes complete sung texts. If the programme appeals (as it certainly does me), then my advice is to let yourself be tempted

the choral singing is superb...I really enjoyed this record and looked forward to playing it often. The excellence of the singing coupled with the aptness of the selection make this collection special.