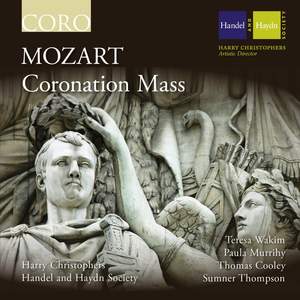 The singing of the Boston Handel and Haydn Society Chorus is spirited throughout, with Harry Christophers highlighting some of the work's most expressive moments, notably the agonised Crucifixus,... — BBC Music Magazine, December 2012, 4 out of 5 stars More…

Mozart’s Mass in C major is one of his most popular and enduring works. Know as the ‘Coronation Mass’ – a nickname it acquired following a performance conducted by Antonio Salieri in 1791 in Prague at the coronation of Leopold II as King of Bohemia – it includes the beautifully tender Agnus Dei. Alongside the Mass on this CD are Mozart’s soprano solo Exsultate, jubilate, beautifully performed by Teresa Wakim, and Joseph Haydn’s Symphony No. 85, which was a favourite of Marie Antoinette, leading to the name ‘La Reine’, by which it is still known today.

Harry Christophers was appointed Artistic Director of Boston’s internationally acclaimed Handel and Haydn Society in 2008. Founded in 1815, the Society is considered the oldest continuously performing arts organization in the U.S. and has given the American premieres of major works by Handel, Bach and Haydn, has won a Grammy Award, and will celebrate its Bicentennial in 2015.

The singing of the Boston Handel and Haydn Society Chorus is spirited throughout, with Harry Christophers highlighting some of the work's most expressive moments, notably the agonised Crucifixus, with acute perception...Throughout the disc the sound picture is finely balanced and well put together.

Christophers draws out plenty of detail, and ensemble and intonation slip only occasionally given that this is a live performance; speeds are brisk

The main attraction is Harry Christophers’ Coronation Mass, heard in a refreshingly unpompous, crystalline performance. That it sounds so zingy is largely down to the singing – a smallish choir moving with singular grace and four well-matched soloists...Teresa Wakim also gives us Mozart’s Exultate, jubilate. She’s lovely, avoiding the shrillness which can blight performances of this engaging work.