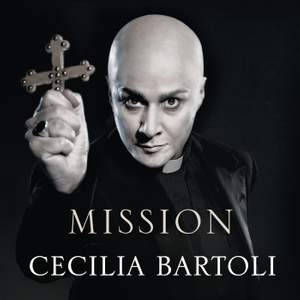 Bartoli's plummy mezzo soars, smoulders and seduces, milking the music's vocal and expressive scope to dramatic effect. It's hard to resist her sparkling personality and infectious passion for... — BBC Music Magazine, Christmas 2012, 5 out of 5 stars More…

Autumn 2012 marks the release of Mission, a sensational new album from the world’s best-selling classical artist, Cecilia Bartoli, and a project with international politics, religious conflict, diplomatic secrecy, spying and sensational music at its heart.

The album showcases the music of a little-known Italian composer and will include solo arias of various moods and styles, several duets, solo numbers with chorus - all sung in Italian - and instrumental interludes that create an organic transition from one piece to the next and an arc that reaches from the beginning to the end of the album.

Such was the appeal of the project that longtime Bartoli admirer and global best-selling author Donna Leon decided to write a mystery novel - Jewels of Paradise - to accompany Cecilia’s album, which uses the mystery surrounding the composer’s story as the centre of its plot. Jewels of Paradise will be released simultaneously with Cecilia Bartoli’s album in English (UK and USA), German, French, Dutch, Spanish and Catalan.

Among the distinguished names appearing on Mission is star French counter-tenor Philippe Jaroussky who features in a first-time collaboration with Cecilia on a selection of duets, alongside the Coro della Radiotelevisione Svizzera, the period orchestra I Barocchisti from Lugano, Switzerland, and conductor Diego Fasolis.

A cinematographic vision of the album directed by Olivier Simonnet and filmed in the historic Galerie des Glaces (Hall of Mirrors) and in the gardens of the Chateau de Versailles will be available on DVD later in the year.

Bartoli's plummy mezzo soars, smoulders and seduces, milking the music's vocal and expressive scope to dramatic effect. It's hard to resist her sparkling personality and infectious passion for this repertoire...the animated playing of I Barocchisti enhance the sheer theatre and scale of Steffani's talent...this is truly a revelatory disc.

she sweeps through 25 numbers flexing her well-rehearsed vocabulary of flighty fioritura, expressive mannerism and tender vocalità. The melting duets with countertenor Philippe Jaroussky are worth hearing

Bartoli is to be both congratulated and thanked for this project...Her dazzlingly virtuoso and urgently expressive performances betoken nothing less than total commitment, with every single aria delivered with as much dramatic intensity and focus as if it had been lifted straight from a fully staged production...it is hard to know what more one could ask for.

I can't think of another singer who brings such variety of colour, nuance and pathos to slow numbers...Bartoli's performance of the more bravura numbers...is more questionable...Vocal fireworks have always been essential weapons in the Bartoli armoury, but they are now sounding rusty...I don't want to end on a negative note, as there is much to admire and even love here...'Mission' is in every sense a collector's item.

conspicuously cosmopolitan music: melodically it often feels very Italian, yet the influence of French courtly dances is also present, and there are other passages which sound almost Hispanic or Moorish...the recital opens with a veritable inferno of pyrotechnics...but the collection also showcases Steffani’s lyrical gifts and Bartoli’s incomparable way with long-breathed lachrymose lines.

Bartoli’s programming instincts are immaculate in terms of musical and emotional variety; she is compelling in pearly arioso and slow numbers, less so in bravura ones.

Steffani’s art is elegantly expressive, Italianate with French dressing...Several brazen display arias are here...Bartoli leaps around the vocal ladder with customary gusto and a rather too vigorous vibrato. The pleasures are subtler when the music is simpler and the voice quieter...Notte amica, say, from La Libertà contenta, or the silky caress of Sfere amiche...These two tracks were definitely worth Bartoli shaving her head.

Among the opera arias Ms. Bartoli dug up in the archives are some treasures, hypnotic, slow numbers in which voice and accompanying strings circle each other like spinning planets and jubilant vehicles for her rapid-fire coloratura singing. Mr. Fasolis stokes the fire with an impetuous period-instrument ensemble.

The music itself is startlingly good...and is magnificently performed here by Bartoli, in thrillingly bravura voice...There’s a colourful array of arias, from rousing battle cries, with trumpet and percussion, to heartfelt, Strozzi- like laments, but it’s the lingering beauty of Steffani’s melodic lines that will hold you spellbound.

The Independent on Sunday 18th November 2012

Bartoli's vocal mannerisms vex and delight – sometimes simultaneously. But for those seduced by the 2010 Royal Opera House production of Niobe, Regina di Tebe, this selection will be irresistible.