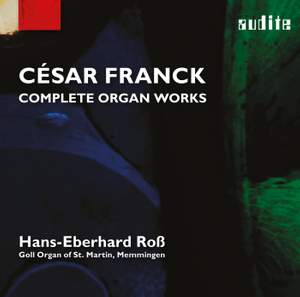 Roß is note-perfect and the sound of the Goll is thrillingly spacious. — Gramophone Magazine, December 2012 More…

Franck, C: Offertoire in A major

Volume 2: Elevation in A major

Volume 2: Andantino in A flat major

Volume 2: Moderato I in C minor

Volume 2: Offertoire in B major

After the successful release of César Franck’s complete organ works on 3 double SACDs audite now presents these recordings in a 6-CD boxed set. This complete edition naturally includes the 12 major well-known works of this composer. In addition to these, it contains many smaller treasures of the repertoire among them at least 40 minutes of music which were presented as first recordings in the original SACD release: The works for harmonium are available here in their entirety in their versions for organ, as are two organ works discovered during the 1970s and 1980s, also new to the recording medium. Besides these aspects of completeness, the present complete production is marked by the special sound of the Goll Organ. Its warm, soft sound, resulting from widely constructed pipes, creates an unobtrusive power and fullness; the essence of the French Cavaillé Organs has been preserved and further developed in this instrument.

Hans-Eberhard Roß, Cantor of the Deanery St. Martin in Memmingen, was decisively and authoritatively involved in the planning and disposition of this organ. Interested music lovers can call up the exact registrations of all the pieces from www.audite.de simultaneously with this issue, as well as short videos about the construction of the organ. The 64pp bilingual booklet gives detailed information about this production.

Roß is note-perfect and the sound of the Goll is thrillingly spacious.

Ross is a fine player and an excellent scholar: every one of these performances, especially of the great works, has to be taken very seriously indeed: his registration and tempos are admirable … It must be clear, with such a combination of scholarship and musicianship as has attended the planning and realization of this set, that the result is an issue of which any organist and record company should be justly proud … and enlightening experience.