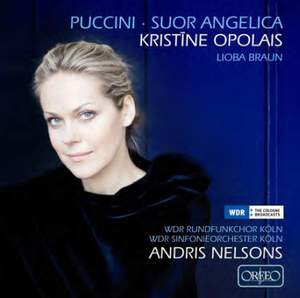 Nelsons evokes atmosphere with energy and clean-cut textures. All told, the effect is slightly cool, but many will prefer it to overheated Italianate performances, especially with such a credibly... — BBC Music Magazine, November 2012, 5 out of 5 stars More…

Puccini’s 'Suor Angelica' used to be seen as one of the composer’s ‘problem children’. As the central work of 'Il Trittico', it is sandwiched between two dramatically more effective pieces: a tale of life in a convent and of the suicide of a mother robbed of her child, it simply could not hold its own against its sister works at their world première in New York. Various cuts sanctioned by Puccini testify to his concessions to the conventions of the opera business. Uncut, 'Suor Angelica' lasts just about an hour, and one often hears it in the concert hall today. With its restrained melancholy and mystical ambience, a concert performance does not diminish the impact of the title heroine and her moving fate. On the contrary, when Kristine Opolais sings Angelica – one of our most exciting young Puccini sopranos (fêted at Covent Garden in Madama Butterfly and in this role) – even a concert hall audience is moved to tears, as we can read in the reviews of her concert performances with the WDR Symphony Orchestra Köln conducted by her husband, Andris Nelsons. Kristine Opolais’s uniquely shaded timbre, her clear sense of line and her subtle characterisation make Angelica a woman of flesh and blood. Andris Nelsons, too, explores the full breadth of Puccini’s musical language in this one-acter, from its formulaic sacred elements to its uninhibited outbursts of emotion. This becomes especially clear when Opolais’s character meets her adversary, the Princess [Lioba Braun] whose dramatic mezzo offers an extreme authoritarian portrait. Angelica’s sisters in the convent offer several of the best women’s voices from the WDR Radio Chorus welcome solo opportunities. This superb cast includes the luxurious voices of the dark-toned mezzosoprano Nadezhda Serdyuk as the stern Sister Monitor and of Mojca Erdmann’s clear, graceful soprano as Sister Genovieffa, who brings the greatest sympathy for the plight of Angelica.

Nelsons evokes atmosphere with energy and clean-cut textures. All told, the effect is slightly cool, but many will prefer it to overheated Italianate performances, especially with such a credibly young and affecting heroine.

Nelsons draws sensitive responses from the Cologne Radio Symphony Orchestra and Chorus but resists the temptation to “go soft” on the story, so that the performance unfolds with inexorable dramatic sweep. Even better, Opolais uses her considerable vocal powers to draw a psychological portrait of formidable insight.

[Opolais's] bright soprano, with its surface sparkle, vividly portrays the intense feelings of Sister Angelica...Lioba Braun has the right dark forceful mezzo for the Princess... Nelsons paces the opera fluidly and the orchestral balance is close, making Puccini's colours come over strongly.

[Kristine Opolais has] a fine lyric spinto, silvery tone, perfect for Puccini...Mojca Erdmann is a delightful Suor Genonieffa, her crystal-clear soubrette just right for this well-meaning chatterbox...[Braun's] mezzo has suitable coldness and depth...Puccini's orchestration is revelled in.

Excellence of singing in a warm blooded performance, recorded immaculately … a wholehearted success

a winning combination. Opolais possesses a freshness, richness and sense of urgency in her soprano that matches well with the fragility and strength of Puccini’s nun … [a] beautifully-managed recording

Kristine Opolais (Mrs Andris Nelsons) may not have the vocal opulence of Renata Tebaldi or Mirella Freni, or the intensity of Renata Scotto, but her beautifully sung account of this heart-rending role demonstrates that her sensational Royal Opera debut as Butterfly was no fluke...Nelsons and the WDRSO relish Puccini’s orchestration.

Opolais's bright, intensely focused soprano, together with her husband Andris Nelsons's equally crisp handling of the orchestral writing, gives the score a much sharper definition than usual. Not everything in her singing is idiomatically Italianate, but there is nothing remotely mawkish or sugary sweet about the performance...Lioba Braun's haughty, formidable Principessa is the perfect foil to Opolais