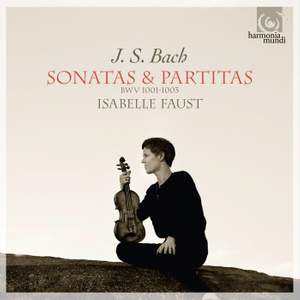 In some of the most challenging violin music ever written, she displays masterly technique...Despite some daring tempos, Faust retains a totally secure pulse through all the technical contortions.... — BBC Music Magazine, November 2012, More…

Isabelle Faust hit the Classical charts earlier this year with her mesmerising recording of Beethoven and Berg with Claudio Abbado. She followed up with some welcome live appearances here in the UK, which included the Brahms' concerto at the Barbican with frequent collaborators Jiri Belohlavek and the BBCSO.

Now she returns to J.S. Bach for a second volume of what Andrew McGregor described in such glowing terms: "there’s some of the best-judged ornamentation I’ve heard in repeated passages. The recording is utterly self-effacing, in just the right way, and my only complaint is that the job’s half done...I’m impatient for the rest! Harmonia Mundi is the label, it’s released this coming Monday, and the notes are excellent as well." CD Review, BBC Radio 3, 27 March 2010

Isabelle is shortlisted for the Gramophone Best Artist Award 2012. Her next concert in the UK is at the Wigmore Hall, October 29 with Alexander Melnikov and Jean-Guihen Queyras.

In some of the most challenging violin music ever written, she displays masterly technique...Despite some daring tempos, Faust retains a totally secure pulse through all the technical contortions. She places admirable faith in Bach's fair copy of the score...[and] in alluringly sensitive in gentler movement.

She creates a feeling that, although there is a deep musiucal understanding behind her performance in which she has quiet confidence, there is no overarching ego trying to make the intricate counterpoint bend to her will.

Faust’s playing of these extraordinary pieces of surpassing musical interest and lyrical content sits comfortably at the uppermost echelons of the league table … Faust is at her heart a poetic player with a warm sound, a tightly controlled vibrato and an athletic technique … A rewardingly stimulating release, beautifully recorded.

Certainly her break-neck tempi for the Corrente and Doubles of the Partita owe more to so-called “authentic” practitioners, but her spectrum of colours and expression — digging into her G-string for maximum intensity — harks back to the virtuoso tradition...She brings them vividly to life here, sounding as if they were fresh off the page.

As you would expect from this most immaculate and intelligent of today's violinists, the performances are very well prepared...Yet there is still a wonderful security and confidence about her approach, a flexibility in her phrasing, and a remarkable control of dynamic and colour.

Unbeatable playing in the conclusion to a benchmark Bach project