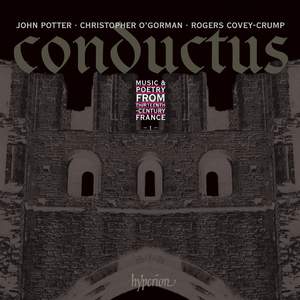 Conductus proves that ascetic simplicity can be as deeply moving and aesthetically breath-taking as the mst complex, heart-on-sleeve music...It's hardly necessary to mention they are superb,... — BBC Music Magazine, December 2012, More…

Hyperion has long been a champion of music from the medieval era and boasts many first recordings in its catalogue, which have combined the highest levels of scholarship with brilliant musicianship, won many awards and opened the ears of a generation of listeners to the repertoire.

In this latest release John Potter, Christopher O’Gorman and Rogers Covey-Crump continue this trail-blazing voyage with a selection from the Conductus genre: the first experiments towards polyphony—the kind of sound we associate with Pérotin. Extensive booklet notes by Mark Everist probe into the intricacies of performance practice as well as analysing the music and poetry in context. This is an important historical document as well as a stunning and committed performance.

Conductus proves that ascetic simplicity can be as deeply moving and aesthetically breath-taking as the mst complex, heart-on-sleeve music...It's hardly necessary to mention they are superb, their precise diction well-served by Jeremy Summerly's production and Julian Millard's engineering.

everything is immaculately clean: every passing dissonance is dead in place and nothing extrinsic is added to the music. It sounds lovely. What is just slightly odd about these performances is that they seem not to make much distinction between songs in praise of the Virgin Mary, songs of political anger and songs about a whore...But these are seriously classy performances.

The poems are about life, death, salvation and, naturally, the frail virtues of women...Three tenors – John Potter, Christopher O'Gorman and Rogers Covey-Crump – deliver these explorations with unerring skill and conviction.