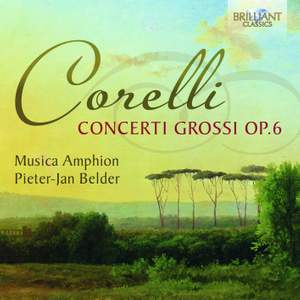 Corelli: Concerto grosso Op. 6 No. 5 in B flat major

Arcangelo Corelli (1653–1713) was nothing less than a musical pioneer, a champion of the violin’s potential as a solo instrument and an immense influence on the composers who followed him, J.S. Bach and Handel included. As a virtuoso violinist, he wielded an unprecedented level of skill; as a composer, he was enormously popular throughout Europe.

Although the Italian composer’s legacy has been somewhat overshadowed in modern times, the 12 Concerti Grossi that comprise this recording are thoroughly worthy of rediscovery, and earned Corelli the description of ‘father of the concerto grosso’.

Indeed, he was one of the first composers to use the term, and established many of the genre’s recognisable features. The mixture of concerti da chiesa (church concertos, which alternate slow and fast tempi) and concerti da camera (chamber concertos, similar to the dance suite) demonstrates the imagination, innovation and versatility that his fellow composers so admired.

Although the vast popularity that Corelli enjoyed in his lifetime may have declined over the centuries, the influence of his 12 Concerti Grossi is undeniable, and can be felt in later concertos by composers like Geminiani and Vivaldi, not to mention Handel’s majestic Concerti Grossi Op.6. Drawn from Brilliant Classics’ criticallyacclaimed edition of Corelli’s complete works, there is much for listeners to discover and enjoy in these recordings, which feature outstanding readings by a leading period-instrument ensemble, Musica Amphion, led from the harpsichord by Pieter-Jan Belder.