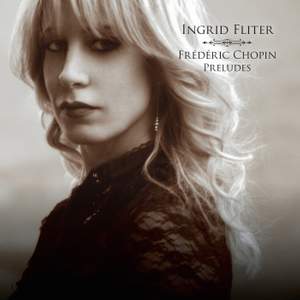 The Argentinian pianist...brings a powerful and individual voice to the Preludes. The first feature that stands out is her tone quality: forthright, with warm and singing legato. She puts an... — BBC Music Magazine, November 2014, 4 out of 5 stars More…

No. 8 in F-Sharp Minor (Molto agitato)

No. 24 in D Minor (Allegro appassionato)

After the overwhelming success of her Linn debut Fliter has proven herself an outstanding Chopin interpreter; ‘Chopin: Piano Concertos’ was named ‘Disc of the Week’ by BBC Radio 3 ‘CD Review’, ‘Album of the Week’ by Classic FM, a ‘Choice’ recording by Gramophone and received many five star reviews.

In recognition of Fliter’s outstanding performance in this repertoire ‘Chopin: Preludes’ will also be released on 180g vinyl in November.

Chopin’s preludes achieve something close to perfection of form within the framework of the miniature, and each prelude has its own melodic, harmonic and rhythmic profile.

Fellow pianist and composer Franz Liszt perhaps summed up the appeal of Op.28 best: ‘…they are poetic preludes, analogous to those of a great contemporary poet, who cradles the soul in golden dreams…’

Completing the programme are two Nocturnes and five Mazurkas, both genres that Chopin defined.

Ingrid Fliter first sprang to international attention when she was awarded the 2006 Gilmore Artist Award, one of only a handful of pianists to have received this honour.

Since winning the silver medal at the 2000 Frederic Chopin Competition in Warsaw, Ingrid has built a reputation as a first-rate Chopin interpreter; The Daily Telegraph describes her as ‘one of the most instinctive and eloquent Chopin interpreters playing today.’

Ingrid Fliter was also selected as a BBC Radio 3 New Generation Artist from 2007-2009, working with several of the BBC orchestras under the auspices of this programme.

The Argentinian pianist...brings a powerful and individual voice to the Preludes. The first feature that stands out is her tone quality: forthright, with warm and singing legato. She puts an individual spin on tempos and character...The Mazurkas are excellently judged with supple and superb voicing.

Fliter seems to be able to achieve individuality seemingly effortlessly, with cherishable and memorable results...She is a virtuoso of the first order but she holds this in reserve, so when she does unleash her full technical armoury, it's extraordinarily potent...The recording captures well Fliter's innate beauty of sound, encompassing the dynamic range with ease. A gem of a disc.

Fliter sets her stall out from the opening bars of the first, C major, prelude, where her generous pedalling gives the music real warmth and breadth that stays just on the right side of overindulgent. But in one or two later numbers she does stray over that line...Against that is a torrential account of the B flat minor prelude, as exciting as any I’ve ever heard.

Fliter understands these pieces from the inside. You can hear from her playing not only that she adores the music but also that she appreciates the characteristics, the sentiments, the ideas that Chopin was distilling in these jewel-like creations.

The 24 Preludes of Op. 28 roll by with the sensitivity that is always Fliter’s hallmark, though it’s left to the fill-up Mazurkas and Nocturnes for this gifted and level-headed pianist to seduce the listener fully with Chopin’s magic spell.