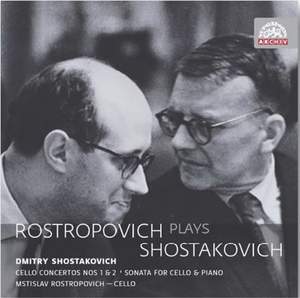 A double-whammy of cello works here - not one but two recordings of the Concerto No. 1, plus a powerful rendition of No. 2, all performed by perhaps the greatest cellist of the 20th Century -... — David Smith, Presto Music, May 2014 More…

Mstislav Rostropovich, one of the greatest 20th-century cellists, studied composition with Dmitri Shostakovich. Their mutual respect soon grew into a close friendship and in 1959 Shostakovich dedicated his Cello Concerto No. 1 to Rostropovich, thus making the cellist’s long-time wish come true. Rostropovich learned the piece within a mere four days and duly played it by heart to the astonished composer.

Two days after the premiere (4 October 1959 in Leningrad), Rostropovich performed the work in Moscow to an enthusiastic audience response. Our CD contains this version, the concerto’s oldest known recording. In 1960, the celebrated cellist and the Czech Philharmonic, under Kirill Kondrashin, presented the piece at the Prague Spring festival.

Back in 1959, Rostropovich and Shostakovich recorded for Moscow Radio the Sonata for Cello and Piano in D minor, written by Shostakovich when he was twenty-eight years of age. The recording is a precious example of Shostakovich’s continuing piano skills at the time when he no longer gave public performances. The fruitful collaboration between the two artists and friends culminated seven years later in Cello Concerto No. 2, which was premiered by Rostropovich in Moscow on the day of Shostakovich’s 60th birthday. A Prague audience first heard the piece about a year later.

These Supraphon discs feature the CD debut of the two Prague recordings.

A double-whammy of cello works here - not one but two recordings of the Concerto No. 1, plus a powerful rendition of No. 2, all performed by perhaps the greatest cellist of the 20th Century - Mstislav Rostropovich, to whom both concerti were dedicated. Shostakovich himself appears on the disc accompanying Rostropovich in the D minor Sonata - it's a unique record of four historic performances