The title of "greatest composer of the Twentieth Century" is hotly contested, and there's no serious prospect of a definitive answer ever being reached. However, few people would dispute that Shostakovich is at the very least a strong candidate for a place on the podium - composing as he did fifteen symphonies, fifteen string quartets, a set of Preludes and Fugues for the piano and enormous amounts of stage and incidental music besides.

The roll of honour of great Shostakovich interpreters is both long and multinational - my choices range from English and Austrian string quartets to a Norwegian cellist and a German violinist.

Even so, it's not surprising that Soviet and Russian artists past and present dominate the list - Shostakovich himself was no stranger to the recording studio, and no survey of his music would be complete without including his close friend Mstislav Rostropovich.

More recently, a trio of Russian conductors indisputably leads the field as far as his symphonies are concerned - Rudolf Barshai, Vasily Petrenko and Valery Gergiev each have the authority and passion to present these towering works convincingly. 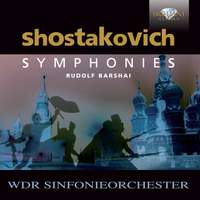 The first box-set I ever bought, and it's as good value now as it was then. If you want to get to know the less famous of Shostakovich's symphonies - and you should - then this is an excellent first port of call. Barshai and the WDR Orchestra bring out the full range of emotions and moods, from sardonic wit to gut-wrenching despair via fatalistic resignation and revolutionary fervour. 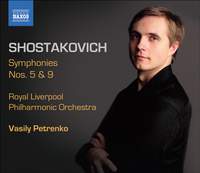 Choosing a favourite recording of the mighty 5th was not easy, but Vasily Petrenko's fresh new take eventually swayed me. The second movement, in particular, is as punchy as I've ever heard it, while Petrenko's unusually slow tempo in the coda lends a real sense of majestic triumph. The other work on this disc, the 9th Symphony, is an absolute joy - a humorous, brisk and characterful work that deserves to be better known. 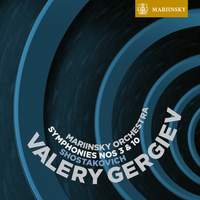 The 10th Symphony is one of Shostakovich's most personal works, its self-expression rivalling the string quartets into which he channelled most of his inner conflicts. His personal motto theme, quoted in numerous works, here takes on a much more prominent role as Shostakovich portrays in music an individual's resistance against tyranny. Valery Gergiev's account of the symphony is visceral and uncompromising - just listen to the initial string chords of the second movement. 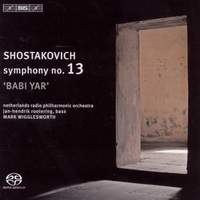 The subject matter of this choral symphony (for male chorus and bass soloist) ranges from a furious denunciation of anti-Semitism to gallows humour at the grim absurdities of Soviet life. Mark Wigglesworth brings out the grotesque elements in the score - the first few bars alone are deliciously eerie and the climax of the first movement is shattering - and Jan-Hendrik Rootering is a commanding soloist who makes the outrage and frustration of the texts powerfully believable. For me, this is Shostakovich at his most devastating. 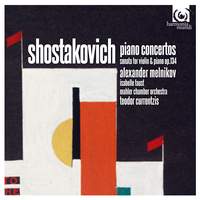 Alexander Melnikov offers brilliant accounts of both Shostakovich's Piano Concertos here - the neoclassical First, enlivened by sparkling trumpet interjections from Jeroen Berwaerts, and the cheerfully lyrical Second. Isabelle Faust's performance of the Violin Sonata is the perfect complement to them, completing an award-winning disc. 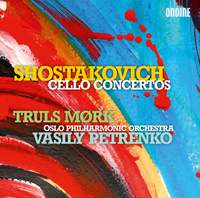 Vasily Petrenko's deep understanding of Shostakovich, coupled with Truls Mørk's peerless musicianship, makes this recent recording of the two Cello Concertos worth taking notice of. The first is a perfect example of Shostakovich's darkly humorous side, in which he seems to use music to poke fun at, and subvert, the flaws of the society in which he found himself living; while the second is, for me, primarily notable for the striking climax of the long first movement, where the soloist is cut off mid-flow by a series of thudding bass drum hammer-blows. 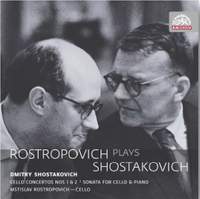 A double-whammy of cello works here - not one but two recordings of the Concerto No. 1, plus a powerful rendition of No. 2, all performed by perhaps the greatest cellist of the 20th Century - Mstislav Rostropovich, to whom both concerti were dedicated. Shostakovich himself appears on the disc accompanying Rostropovich in the D minor Sonata - it's a unique record of four historic performances. 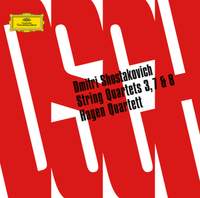 In many ways the darkest and most intensely personal of Shostakovich's string quartets, and widely regarded as the finest, the Eighth is dominated to an almost obsessive degree by his personal "motto" motif of D, E flat, C and B (in German D, Es, C, H standing for Dmitri Schostakowitsch). The Hagen Quartett combine it here with the Seventh (written in memory of the composer's first wife Nina) and the Third. 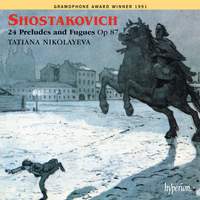 Tatiana Nikolayeva has made something of a speciality of recording Shostakovich's solo piano works, and this complete set of the 24 Preludes and Fugues, recorded only shortly before her death, was her third recording of them - perhaps not surprisingly, since Shostakovich originally dedicated them to her. Her affinity and intimate feeling for the Preludes and Fugues is certainly in evidence here. 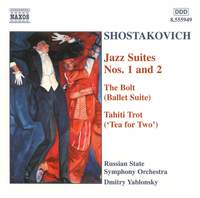 Shostakovich's lighter side is very much on show in these suites - which tread a finely-judged line between mocking the decadent musical tastes of the Capitalist West (particularly in the suite from the ballet The Bolt) and, in fact, adopting those very same stylistic tendencies. The highlight of the whole disc is probably the orchestration of Tea for Two. This delightful miniature was the result of a bet in which Shostakovich was challenged to complete the orchestration in the space of two hours; 45 minutes later he was finished. 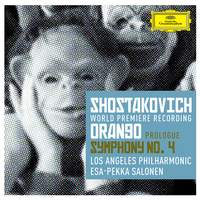 Prologue to 'Orango' (with Symphony No. 4 in C minor)

Orango was a proposed opera that Shostakovich never completed. In view of its mercilessly satirical content (the plot centres on a human-ape hybrid exploiting the corruption and venality of the Soviet bureaucracy to his own advantage), this is hardly surprising; so it was a stroke of luck when a 13-page piano score of the Prologue was discovered in Moscow in 2004 and subsequently orchestrated by Gerard McBurney. This recording of the Prologue is coupled, appropriately enough, with perhaps Shostakovich's most musically controversial symphony, the highly Modernist 4th. 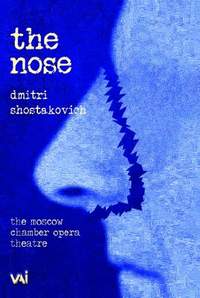 Shostakovich was hardly an enfant terrible - a mild-mannered individual, he didn't set out with the deliberate intention of rocking the boat with his music. Still, one way or another, most of his stage works seem to have been controversial or landed him in hot water - see both above and below for examples! The Nose is no exception; based on a short story by Nikolai Gogol, this is a surreal satire on the Soviet social hierarchy in which a man's nose leads a brief, but highly successful, life independent of its erstwhile owner. Gennady Rozhdestvensky leads a production in which the irreverent, slapstick-esque elements of the score are brought to the fore. 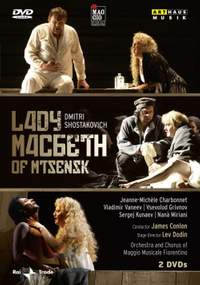 It may have enraged Stalin - and drawn parallel accusations of "pornophony" from the New York Sun - but Lady Macbeth is nevertheless a compellingly ambiguous work, and under Lev Dodin's direction at the Teatro Comunale in Firenze, it comes to life even more vividly and viscerally. This is a live recording in every sense of the term, and Jeanne-Michèle Charbonnet brings the two sides of Katerina's character - the twisted criminal and the oppressed victim - across perfectly. 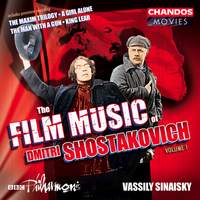 Perhaps not surprisingly for a prominent late-20th Century composer, Shostakovich turned his hand to writing for the screen; indeed his output of film music is considerable, and it's unfortunate that it has mostly been dismissed as merely the soundtracks to Communist propaganda. It's true that a lot of the Soviet films for which he composed had an overt political message, but Shostakovich's artistic response to them is nevertheless engaging.