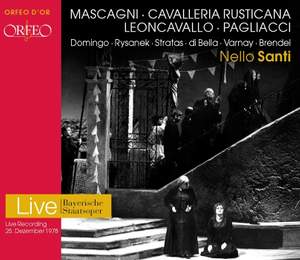 Domingo is magnificent as both Turiddu and [Canio]. Rysanek is a brooding, dark-toned Santuzza, but Stratas's Nedda too much the waif and stray. — BBC Music Magazine, Christmas 2012, 4 out of 5 stars More…

Act I: Scene and Chorus of the Bells: I zampognari! (Ragazzi, Chorus, Canio)

Even as recently as the 1970s it was by no means certain that the biggest German opera houses would perform the works in their repertory in their original language. When well-known singers made guest appearances in mainstream operas, it was in no way exceptional for the performance to be sung in more than one language. But this was not the case in the meticulously rehearsed first night of the two most famous one-act Italian operas, Mascagni’s 'Cavalleria rusticana' and Leoncavallo’s 'Pagliacci', which opened at the Munich National Theatre on Christmas Day 1978.

Under Nello Santi’s gripping and thrilling conducting, the Bavarian State Opera’s cast was made up of a veritable galaxy of star performers: great names, but also singers able to work together as a close-knit ensemble. Singing Santuzza for the first time, Leonie Rysanek discovered a new signature role admirably suited to her expressive abilities and to a voice whose upper register was as radiant as ever. Opposite her was Plácido Domingo, who in this production essayed the leading tenor roles in both these operas: with his bronze timbre, he was quite the impulsive predator and seducer as Turiddu, while as Canio he was alarmingly impulsive in his raging fury as the cuckolded husband. Teresa Stratas and Wolfgang Brendel were likewise ideal casting as Nedda and Silvio in Pagliacci, both of them excellent at stoking the fires of jealousy. Domingo was not the only singer to appear in both works. So, too, did Benito di Bella as the carrier Alfio and as an artful Tonio. With his sturdy baritone he brought both figures to vibrant life in finely etched performances. The same is true of two singers in smaller roles, both of them tried and tested in the refining fires of Bayreuth: the legendary Astrid Varnay as Mamma Lucia and Norbert Orth, later to make a name for himself as a heldentenor, as Beppe. Giancarlo del Monaco’s production remained in the Munich repertoire for decades, the spectacular success of its first night due in no small measure to the Chorus of the Bavarian State Opera, which slipped effortlessly into the roles of members of a village community in both works, investing their characters with a vivid vocal and dramatic profile.

ORFEO’s live recording on CD not only documents this first night, it once again allows listeners to share in the excitement of the occasion.

Domingo is magnificent as both Turiddu and [Canio]. Rysanek is a brooding, dark-toned Santuzza, but Stratas's Nedda too much the waif and stray.

an exciting Cavalleria.This is surely Domingo's more convincing part of the two. Varnay's veteran Lucia is riveting...In Pag, Stratas, predictably, is sensational - she IS the drama. Domingo is never less than solidly there vocally but tends to over-sentimentalise.

On the basis of this live recording, the evening clearly belonged to Domingo...As Turiddu his tone is consistently golden...Canio's big solos are beautifully sung...[Brendel] has precisely the warm tone, soaring top and effortless flow of legato that Silvio requires. Stratas's voice startles the ear with its pungency and immediacy in her role's initial phrases.