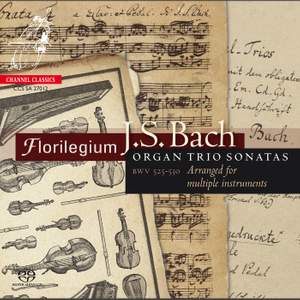 if the spirit of the originals is hard to reproduce, the attempt yields a rich crop of repertoire-enhancing chamber music. The playing sparkles with an intoxicating freshness that continually... — BBC Music Magazine, November 2012, 4 out of 5 stars More…

The wealth of secular and sacred music Bach produced in his lifetime belies the fact that very few bona fide works for chamber ensemble exist (or survive). This prompted us, with a great sense of humility and deference towards the master, to increase our chamber repertoire with these beguiling gems.

Our task of adapting these pieces for varying combinations of instruments can also be seen as harking back to Bach’s own interest in transferring styles and idioms from other works to a solo or group of instruments, and vice-versa, something which he explored particularly during his years of employment at the ducal court in Weimar (1708-1717).

Regular performances in some of the world’s most prestigious venues have confirmed Florilegium’s status as one of Britain’s most outstanding period instrument ensemble. Since their formation in 1991 they have established a reputation for stylish and exciting interpretations, from intimate chamber works to large-scale orchestral and choral repertoire.

if the spirit of the originals is hard to reproduce, the attempt yields a rich crop of repertoire-enhancing chamber music. The playing sparkles with an intoxicating freshness that continually invites the lively outer movements onto the dance floor.

Especially imaginative scorings inform Florilegium's critiquing of the sonatas' contrapuntal clarity and spaciousness, ones which exploit the multi-genre references which so fascinated Bach...the main Florilegium protagonists offer some wonderfully responsive and vital Bach-playing, esepcially in the framing works.

it is a measure of Florilegium’s success that anyone who does not know the organ originals would hardly guess that these trios were not conceived for flute, strings and lute or harpsichord continuo. To purists, the combinations might seem un-Bachian, but the instrumentation is inspired. This entrancing disc is a team effort, unreservedly recommended.

The trio sonatas that Bach wrote, probably for his son Wilhelm Friedemann to master his skills at the organ, are so perfect that you can understand why others have plundered them for different instruments...The most successful are BWV 525 and 526, nicely done with flute and violin duetting equally over continuo.