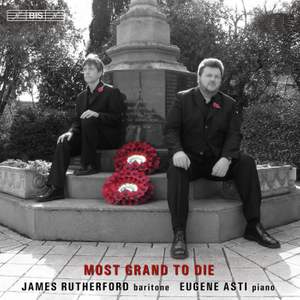 Most Grand to Die

A hefty bass-baritone in every sense, he's inevitably compared with Bryn Terfel, but his voice seems darker and somewhat smoother, less given to pianissimi but still expressive...Songs of Travel... — BBC Music Magazine, December 2012, 5 out of 5 stars More…

No. 2. O Fair enough are Sky and Plain

No. 3. When the Lad for the Longing Sighs

Gurney: Even such is time

No. 1. Loveliest of Trees

No. 5. The Lads in their Hundreds

No. 6. The Infinite Shining Heavens

No. 9. I Have Trod the Upward and Downward Slope

James Rutherford, with Eugene Asti at the piano, here records his first disc for BIS, presenting a programme of works from composers all influenced greatly by the First World War.

Vaughan Williams turned to poems by Robert Louis Stevenson, for his Songs of Travel, a set of nine songs in which the wanderer-narrator philosophically accepts the mixture of joys and sorrows offered to him along the road.

Gurney – the youngest of the three composers – was also a poet, and in Severn Meadows expressed his longing for home in both text and music. Severn Meadows was composed during Gurney’s time in the trenches.

A hefty bass-baritone in every sense, he's inevitably compared with Bryn Terfel, but his voice seems darker and somewhat smoother, less given to pianissimi but still expressive...Songs of Travel has a notably virile energy, reinforced by veteran accompanist Eugene Asti's unusually driven reading...A very worthwhile recital.

Rutherford brings his Wagnerian bass-baritone to bear on the song repertoire with uncommon skill and sensitivity...The only serious drawback comes at the top of the voice, where Wagnerian bluster and a slow vibrato sometimes detract from the beauty of his singing...but Rutherford has given notice of a very appreciable talent for song. With accompaniments of exemplary precision, this disc is highly recommended.

Rutherford's full tone, dark, possibly bass-baritone rather than BIS's designation of baritone, is released with the vigour to resemble somebody, here the vagabond, striding purposefully along the lane...Asti's playing gels with Rutherford's singing in these Gurney songs, as it does in the other pieces...Rutherford's enunciation is all one could wish for.

The quality of the Gurney songs may be a bit uneven, but Rutherford handles them all with great tact, his tone fined down, his diction immaculate, and without a hint of extraneous pathos. In the authentically great Butterworth sets Rutherford's approach is exemplary.