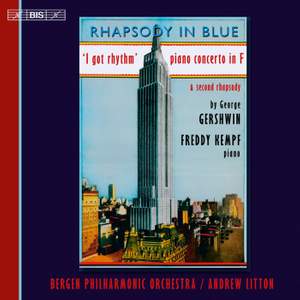 His first entry in the ambitious Concerto in F is a touch disappointing...But his playing after that combines dazzling articulation with a feeling for jazz rhythms and big Broadway-style tunes...Litton,... — BBC Music Magazine, October 2012, 4 out of 5 stars More…

Recording of the Week,  Rhapsody in Blue – Grosvenor and Kempf

Freddy Kempf and Andrew Litton with the Bergen Philharmonic Orchestra here join forces to present a disc of works by George Gershwin.

Rhapsody in Blue was originally arranged by Ferde Grofé for jazz band before being orchestrated for symphony orchestra. Here Kempf and the Bergen Philharmonic play this original version.

Concerto in F was a commission for Gershwin to write a ‘proper’ piano concerto, but still takes the rhythms, melodic structures and bluesy harmonies of popular music.

The disc is completed by Gershwin’s two remaining works for piano and orchestra, the Second Rhapsody and Variations on ‘I Got Rhythm’.

His first entry in the ambitious Concerto in F is a touch disappointing...But his playing after that combines dazzling articulation with a feeling for jazz rhythms and big Broadway-style tunes...Litton, no slouch himself as a Gershwin pianist, provides an idiomatic accompaniment with his Bergen Philharmonic, resplendently recorded with the piano nicely integrated into the texture.

Freddy Kempf is totally efficient and well balanced in this recording, and in the finale his repeated-note panache is breathtaking, threatening to come unstuck - but it never does...The chief attraction of this CD is getting all these pieces together in convincing performances.

The Piano Concerto is terrifically exciting, with wonderful orchestral sounds and very stylish playing from Kempf. And as a collection of all Gershwin’s music for piano and orchestra on one disc, this is most definitely up there with the very best.

This is a fun reading [of the Rhapsody], but Kempf doesn’t sound quite as unbuttoned as in the later pieces. There’s plenty of technical brilliance – staggering rapid passage work and articulation, but the emotional thrills are provided by Litton’s Bergen forces... But stick with Kempf – it’s a thrill to hear him slowly drop his guard and deliver a slow movement of melting beauty