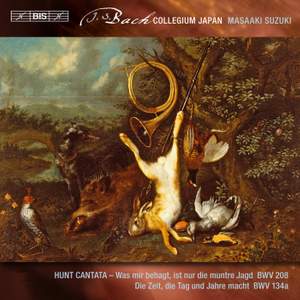 The “Hunt Cantata”, composed in 1713, is the oldest of his secular cantatas. The libretto includes a dramatic plot in which four divinities from ancient mythology appear.

Die Zeit, die Tag und Jahre macht was intended for the 1719 New Year celebrations in Köthen. The cantata is set as a dialogue between Time (tenor) and Divine Providence (alto), who in the final movement are joined by a chorus wishing ‘glückseligen Zeiten’ (‘joyous times’)

Sophie Junker is a personable Diana to tenor Makoto Sakurada's youthfully lyrical Endymion. Best of all if baritone Roderick Williams's Pan who renders the outrageous toadying distinctly palatable. Suzuki shapes everything with his trademark light touch, if he's sometimes inclined to under-characterise the drama.

brilliantly caught, from the casting of the four characters to the expectional continuo work, led by Suzuki himself. Makoto Sakurada (as Endymion) conveys the ensnaring potential of love with friendly caution, while Pan (the ever-communicative Roderick Williams) delivers the first feel-good excursion in celebrating our Prince as Pan of his country.