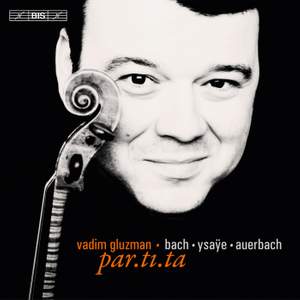 it's good to hear even a little sense of struggle as he conquers Ysaye's demanding writing. The ten short movements of Auerbach's par.ti.ta refract Bach through a contemporary prism and Gluzman... — BBC Music Magazine, October 2012, 3 out of 5 stars More…

The Partita No.2 was described as ‘one of the most wonderful, most incomprehensible pieces of music’ by Brahms, and is followed on the disc by Auerbach’s par.ti.ta, composed specifically for Vadim Gluzman.

In Ysaÿe‘s Sonata in A minor the parallels with the Partita No.3 are very strong. It was composed in 1924 as the second of a set of six, each sonata dedicated to a fellow violin virtuoso, and although the affinity is obvious, he incorporates elements wholly alien to Bach.

Vadim Gluzman’s previous discs on BIS have ranged from solo works and chamber music by Lera Auerbach, Arvo Pärt and Alfred Schnittke, to the great violin concertos by Bruch and Tchaikovsky.

it's good to hear even a little sense of struggle as he conquers Ysaye's demanding writing. The ten short movements of Auerbach's par.ti.ta refract Bach through a contemporary prism and Gluzman finds even more colour and concentration, captured by the in-depth recording.

Gluzman plays the outer movements [of the Ysaye] with the virtuoso panache that must have been in the composer's mind...Gluzman shows himself to be a fine Bach-player, too. Occasionally I longed for the subtle illumination of phrasing, the sort of light and shade that's much easier to achieve with a Baroque bow...But each movement has a sense of life and poise; the Chaconne is especially impressive

It all makes for fascinating listening. Gluzman has an agile technique and tonal range that fit him well for the demands of the D minor Partita’s great chaconne and for the other difficulties in this music, but, more importantly, he projects both a sense of style and an interpretative personality that give his playing a magnetic presence.